How to recognize North America's four most venomous serpents. 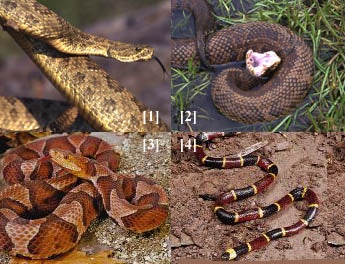 Something rustles the grass beside your boot and your heart stops somewhere in your throat. Deep down, you know what it is, though your brain scrambles to deny it. It’s a snake, and it knows exactly where you are, even as it hides from view. Your mind conjures the worst: a deadly serpent, coiled out of sight, zeroed in on your calf.

At a time like this, it may not be entirely comforting to realize that of all the types of snakes in North America, only four pose a hazard to humans: rattlesnakes, cottonmouths, copperheads and coral snakes. Of course, within each category there are numerous individual species. Manny Rubio’s book, Rattlesnake: Portrait of a Predator [BRACKET “1998, Smithsonian Press”], lists 84 distinct species and subspecies of rattlers in the Americas. Each displays unique traits, making precise snake identification a challenging endeavor.

The Four Types
Of the four species of venomous snakes, three are pit vipers. Rattlesnakes, cottonmouths and copperheads all have a pair of pits on their face. These pits can be confused with nostrils, but they are actually heat-sensing organs that help the snake identify prey and enemies. If you’re close enough to see the pits, you’re too close.

The Unsilent Killer
Rattlesnakes have heavy, triangle-shaped heads and eyes with slitted, elliptical pupils. Size, color and pattern may vary, but every rattler’s tail is equipped with a rattle. If the snake’s tail has been injured, however, the rattle might be missing. Rattlesnakes can be found from sea level to the mountains, in deserts, grasslands, forests and jungles. Places that suffer extreme cold in winter can still host rattlesnakes during the summer. Snakes seek shade on hot days but are likely to sun themselves on rocks when it’s cool. Rattlers camouflage themselves in brush or leaves and seek the shelter of ledges, old buildings, logs or pieces of plywood.

[pagebreak] The Amphibious Reptile
Cottonmouths are heavy-bodied pit vipers that get their name from the white color inside their mouths. They come in a variety of subspecies and are sometimes known as water moccasins, as they are often found in or near water. But cottonmouths are also proficient on dry land, where they feed on mice or rats. Body color ranges from black to brown to olive. Often the body is one color, but secondary colors are visible on some; the pattern can be either banded or mottled. Among the snake’s distinctive features are a “raccoon mask” face, cat-eye pupils and a white stripe along its head. Juvenile cottonmouths are brighter in color than the adults. The youngsters have yellow tails that they use to attract frogs and insects for food.

Hissing Cousins
Copperheads are similar to cottonmouths, with similar heavy, triangular heads and cat-eye pupils, but are generally more brightly colored, ranging in hue from copper-brown or bright orange to silver-pink and even peach. Young copperheads can have the same bright yellow tail coloration as a young cottonmouth. They are usually found in wooded hill country, preferring shaded areas where they can seek cover and rodents as prey.

Odd Snake Out
Coral snakes are not pit vipers, and their heads are relatively small, smooth and bluntly bullet-shaped. Their coloration is quite distinctive, with alternating red, yellow and black bands. A true coral snake has a black nose and a bright yellow head, and bands in the pattern of black- yellow-red-yellow-black down the length of the body. The old saying, “Red and yellow, kill a fellow-red and black, venom lack,” is only half true, because there are counterfeit coral snakes with red bands flanked by yellow bands (and not separated from the red by black bands) that are not true North American coral snakes. The most accurate identifying marks are the black band on the nose, the yellow head and the pattern described above.
** 1. Rattlesnake** Rattlers can be found everywhere, from the desert to the mountains to the forest.

**2. Cottonmouth **Named for the white color inside their mouths, cottonmouths are at home on land or in the water.

**4. Coral Snake **Corals are the only venomous snake in North America not in the pit viper family.