Master the basics of GPS navigation. 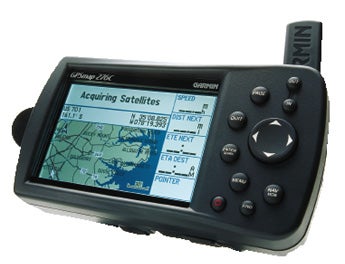 From outer space, it watches your every move. No, it isn’t an alien race; it’s a cluster of satellites that can communicate with your handheld GPS.

As you probably know, GPS refers to the Global Positioning System-a network of 24 non-geosynchronous orbiting marvels that can save your bacon when you’re roaming around the backcountry. “Non-geosynchronous” means that they are not always in the same place, above a particular patch of earth. They fly over the horizon and out of sight, only to be replaced by sister ships that rise from beyond another horizon. But with 24 of them positioned nearly 11,000 miles up and spaced out as they are, a minimum of six satellites is always overhead.

There is no doubt that GPS is great, but you need to understand its limitations as well as its benefits. The wise outdoorsman looks upon GPS as a tool to be used in addition to a map and compass, not as their replacement.

Three-piece Navigation
Though it may surprise some sportsmen, a GPS unit is not a compass. It might have a “compass” page function, but it isn’t a real magnetic compass. A GPS’s compass function operates only when you’re moving. Another reason to hang on to a map and compass is that a GPS can go dead on you if the batteries give out; you never have that problem with the old reliables.

There are good reasons to use GPS in conjunction with a map, however. The map is a graphic representation of the earth’s surface. By using the coordinate information provided by the GPS, you can pinpoint your position on the map (and therefore on the planet) with a very high degree of accuracy. Then you can study the map to see where you are in relation to other things.

For the GPS unit to give accurate information that coincides with your map, you must set its datum to match the map’s. You’ll find map datum information in a text block, usually on the lower left-hand corner of your map. It will say something like “1927 North American datum.”

One of the great things about a GPS unit is that you can program it with waypoints, or destinations you want to reach. A chain of waypoints constitutes a route, and you can set your waypoints and plan routes while sitting at home before the trip. Even if you do that, however, you’ll still need the map. If you use a GPS without a map, you run the risk of making some serious navigational blunders. That’s because a GPS has no idea what stands between you and your next waypoint. The legs of the route are only generalities-you still need a map to avoid pitfalls.

Electronic Crumb Trail
So, is a GPS any good at all without a map? Yes. If you move with your GPS switched on, it will keep track of your progress, leaving an electronic trail of crumbs. Before leaving camp, you can create a waypoint and name it “camp.” As you travel, you can continue creating and naming waypoints. Then when you want to return to camp, you simply choose the waypoint from the menu and follow the GPS.

Remember that a GPS is an electronic device, so it is only as good as its batteries. Always carry a spare set in a plastic bag.