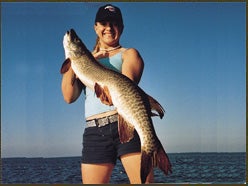 Having caught muskie No. 100 the other day, Libby Hoene, age 14, is now cleared to enter the dating phase of her teenage years.

Well, that’s not quite accurate. “My mother now says I have to be fifteen,” Libby grumbles. “My dad said I could start dating when I caught my hundredth muskie but now he’s siding with Mom.”

Oh, the trials and tribulations of Libby, Minnesota’s teen queen of muskie fishing.

It all began on October 10, 1996, the day nine-year old Libby caught a 48-inch muskie, her first, while fishing with her father, Tim, on Mille Lacs.

“I was bitten by the bug,” she says, giggling. It was quite a bite. Six fishing seasons later, Libby has passed the 100 mark for muskies caught (over 30 inches). She has landed 20 muskies longer than 48 inches, a foot shy of being as long as Libby is tall. The biggest of her yet-young fishing career is a 52-incher that weighed an estimated 36 pounds and still swims somewhere in a Twin City lake. “I’m never gonna quit,” she says.

Libby is now a ninth grader but she already has an advanced degree in muskie fishing. “I’m not a fluke,” she said. “When I set the goal of one hundred muskies, so many people said I’d never be able to do it. I just said, ‘I’m gonna.'”

Libby has a new goal now. Maybe 200 muskies. And she’s been thinking about the time when she has that first date. “He’s going to have to endure long hours of casting for muskies like I do,” she warned.