Feeling lucky? Try fighting a shark with a 12-weight. 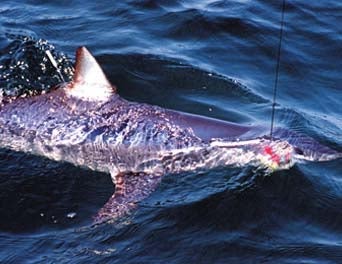 The mako exploded out of the water, its muscular body visible to nearby anglers. The 5-foot shark contorted itself as it desperately tried to shake loose the bright fly jammed in its jaw. Crashing back into the Atlantic, it peeled off more line from the screaming reel.

“That was the third jump; there might be a couple more,” Captain Joe Pagano told Bob Greco, the angler, as he maneuvered his 23-foot Wellcraft, trying to get close to the thrashing shark. Angler and captain worked together flawlessly during the wild fight.

“You don’t need special flies for a shark,” Pagano explained. “Just something silver wrapped around the hook will do.” Compared to flyfishing for a finicky trout, shark fishing is rather uncomplicated. Matching the hatch here off Cape Cod means tying a fly that looks like a hapless fish torn to shreds, or a small piece of chum.

After a quick run to the fishing grounds, Pagano started a chum slick by cutting two small holes in a 5-gallon pail of ground menhaden. The oilier the fish, the stronger the attraction for marauding sharks.

“Nothing to do but wait,” Pagano said as the boat drifted, leaving a trail for the sharks to follow. “Hopefully they’ll come across the slick and try to follow it to the source.” We relaxed on the boat and enjoyed a sunny morning on the water.

Then suddenly, Pagano’s experienced eyes spotted our quarry. “Sharks,” he said. “There’s a mako, too.” As quickly as the alarm was sounded, all aboard started scrambling for a look. Pagano calmly worked on getting a mackerel overboard to keep the sharks interested and nearby. Greco placed his fly near the fish. “Let it sink a bit,” Pagano suggested. The mako liked what he saw. As soon as Greco drove the hook home, the fish made a run for it, rocketing 10 feet off the water’s surface.

After more acrobatics and an hour of give-and-take, reel-to-fish combat, Greco had worked the mako close enough for Pagano to grab the leader and guide the fish to the boat. Pagano tagged the shark and the fly tore out, freeing the fish to grow and fight another day.