Hooking Up With May

This beauty of a month is turning some heads. 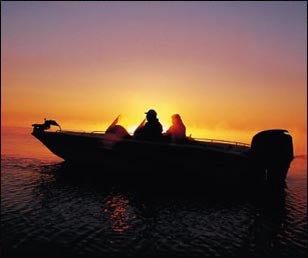 If Midwestern sportsmen judged months as though they were beauty pageant contestants, May would be a perennial front-runner. April can be pleasant and sunny, but give her a day and she’ll slap you silly with a snowstorm or a cold, drenching rain. June can be much more kind, but she’ll dole out just enough glimpses of midsummer heat, humidity and thunderstorms to make even the softest judge a little cranky.

So a Midwestern May stands out, combining a knockout appearance with a kindly disposition. The sun warms the earth in earnest. The rains are mostly warm and mellow, the snow almost a memory.

City Bass
Speaking of pretty creatures, what better way to get excited about angling than by pitching a lure at a smallmouth bass? I adore bronzebacks not only for their beauty, but for the wonderful-and sometimes unusual-places they live. Take, for example, Illinois’s Fox River, which flows barely an hour west of downtown Chicago through the towns of Aurora, Batavia and Geneva. Bike trails run parallel to the river and provide access to many runs and holes. Another good urban fishery exists in the St. Joseph River as it runs through the Indiana towns of South Bend and Elkhart en route to Lake Michigan. Pitch a yellow or white curly tail near cover and you could tangle with a scrappy St. Joe smallie.

Want your bass on the wild side? Then take a float trip on Oklahoma’s Glover River, the state’s last undammed river, which flows through the Ouachita National Forest. This is remote country, so your only companions will be deer, turkeys, river otters and plenty of fish. In Nebraska, hybrid striped bass should be getting active on Hugh Butler and Harlan County lakes. Fish up to 15 pounds are possible, even from the bank.

The Midwest may not grow largemouths like Texas or Florida, but visit lakes like eastern Ohio’s Salt Fork, Seneca and Piedmont and you won’t be pining for the South. Biologists have sampled some true “hawgs” at these “interstate lakes” (all three lie within an easy drive of I-70 and I-77). In North Dakota, it’s gotta-go time on the shallow bays of Lake Sakakawea’s eastern end, where walleyes and smallmouths can hit crankbaits with abandon. Look for fish in three to five feet of water, and bring plenty of Shad Raps and ThunderSticks. For a unique Michigan walleye experience, try the St. Clair River. While vertical-jigging can produce a trophy fish, locals use “whipping” and “handlining” tactics to score on dandy marble-eyes.

**Trout, Turkeys and Tags **
May is tailor-made for trout fishing, and one can’t-miss spot is the coulee country near La Crosse, Wis. There are a variety of fish, from small-stream brookies to pig-headed river browns. For a dose of the latter, try the Kickapoo River system and its tributaries. Iowa is a sleeper state for trouters, and it also boasts diversity. Waterloo Creek in Allamakee County is a gem worth exploring for browns.

Some of the season’s best turkey hunting occurs in May, after the crowds have gone. South Dakota’s Black Hills offer a rebounding population of Merriam’s birds. Recent licensing changes require hunters to buy tags through the Game, Fish & Parks office in Pierre, but they’re also available on-line. Western Kansas is the place to go for a gorgeous Rio Grande bird; some top hunting occurs on timbered river bottoms, but don’t overlook isolated patches of timber on the prairie.

I’ve always been a big fan of combo trips, when hunting and fishing are rolled into one safari. Northeastern Missouri serves up a dandy sample near Mark Twain Lake, where you can spend the morning working a tom on the Corps of Engineers land surrounding the lake, or on nearby state-owned lands. At the 1 p.m. close, grab your crappie gear and fish for dinner on the 18,600-acre lake. The best action is usually near the north, middle and south forks of the Salt River.

May is also an important month forr license application deadlines. Black bear hunters who want a chance at a Michigan or Minnesota bruin need to file pronto. Whitetail nuts wanting a shot at the monster bucks growing in Iowa and Kansas should be filling out applications now, too. Demand for these precious tags remains high…but then again, anything seems possible in a beautiful month like May.