Poachers Duped by a Decoy

Ah, elk season in the West. A time for great adventure. A time for goofballs shooting the heck out of law-enforcement decoys. 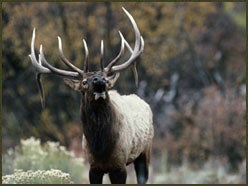 Ah, elk season in the West. A time for great adventure. A time forÃƒÂ¤goofballs shooting the heck out of law-enforcement decoys.

The Oregon State Police Decoy Program has seen its share of follies. Like the time three guys stopped near a decoy in a pickup truck. Two got out and began shooting as the driver shot out his window. After a barrage of withering fire, they realized this elk wasn’t real and took off, leaving a buddy behind. The man sprinted for the trees and into the waiting arms of the police.

Once, a state trooper came upon a man shooting so intently at a decoy that he had to grab the man’s rifle and shoulder and shout loudly to stop him. The hopeful man, not hearing the officer identify himself, said, “Did I hit it? Did I hit it?”

Another man should have listened to his wife. While this fellow stood alongside his truck and shot twice at an elk decoy, his wife slid behind the wheel and drove off, leaving him standing in the road. When the officers caught up with the woman (she wasn’t charged with any crime), she said, “I told that sonuva#*@!* that elk was a decoy!” She was heading back to camp without him, 15 miles away, but the cops managed to get her to agree to wait for her man.