A practical hunting tool has become a lifestyle choice. 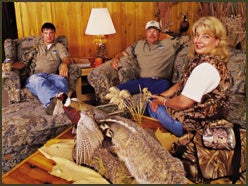 The concept of camouflage has been around since the first caveman smeared himself with mud and stuck twigs in his hair to avoid being stomped by angry mastodons. Recently, however, camo has made the leap from being a practical item-something you wear in the field to hide from game-to being an impractical item-something that defines who you are.

Camouflage is a new lifestyle. More and more, buying camo through sportsmen’s catalogs is an exercise in self-expression. The modern hunter is faced with tough questions with far-reaching implications: If I buy that dust ruffle in Advantage Wetlands, will it clash with the bed skirt in Mossy Oak Break-Up? Is Realtree Hardwoods really the pattern I want in a toothbrush holder? What kind of message am I sending with those Advantage Timber pillow shams?

If you haven’t considered these things, chances are your wife or girlfriend already has. Most guys couldn’t tell the difference between a dust ruffle and a dust bunny (and if they could they wouldn’t go blabbing about it to their buddies). Over the past five years, the explosion in the number of items available in camouflage-Advantage/Realtree alone licenses its patterns to more than 900 manufacturers-is due largely to the influence of women like Kim Nelson, who recently purchased a set of camo luggage.

“I just love it,” Kim says. “It’s waterproof, so if I want to I can throw it in the back of my Hummer. I get a lot of comments, even if I’m staying at a fancy Hilton or Marriott or whatever.”

Kim and her husband, Owen, operate Bunker Hill Hunting Resort in southeastern Nebraska, named after the old ammunition depot it was before they bought the property. “To try and pound a nail into the wall or do anything with those cement bunkers is kind of tough,” Kim says, recalling the difficulties they ran into while remodeling the main lodge. “So I ordered a bunch of camouflage cloth from Cabela’s and put it on the ceiling and the walls, just like you would wallpaper. It gives it a real cozy, homey atmosphere.”

Today, Kim could get camouflage wallpaper. And carpet. And curtains. Light switch plates. Ceiling fans. Bathroom tile. Toilet seats. The list goes on. “We get more E-mail from guys saying they’re looking for this or that because they have one room in the house that’s theirs,” says Amy Key, a licensing account manager for Realtree. “But the female consumer is usually buying it for a husband, a boyfriend or a son.”

The fact that you can buy camouflage furniture in various styles suggests this isn’t merely a retail fad pushed by ruthless marketers. Not many sportsmen can afford to spend $1,200 on a novelty item, even if it does come with DuPont Stainmaster fabric guard.

“So many of these consumers live and breathe hunting, all year round,” says Key. “When they’re not actually hunting they’re planning for the next season. They not only hunt in their garments; they work in them at construction sites and things. That carries on into the home, whether it’s the bedspread or a piece of furniture.”

But beware: Every camouflage pattern has its proper place. Kim Nelson has cultivated a sort of Martha Stewart aesthetic of where and how to use it. “Busier patterns-like the Wetlands look-are real appealing to me on a wall or a bedspread,” she advises, “while Realtree is more appealing on coats and shirts.”

From cradle to grave, there’s something camo for everyone these days. The dearly departed can be buried in a camo casket or enshrouded in a camo coffin lining. Impressionable newborns have even more choices, from diaper stackers to cribs and bibs. “We see no end to this trend,” says Bryan Stave, product manager for Cabela’s. “The more automated things get, the more people will want to get away and live within a hobby they enjoy, and hunting and fishing are important elements in getting away.”