The time has come to delist the wolf. 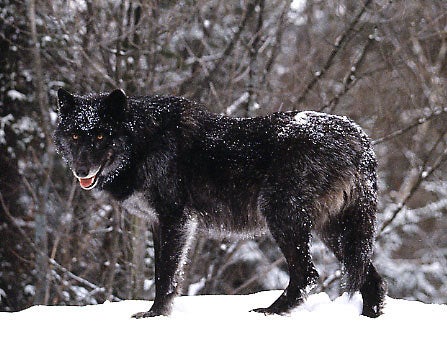 LAST NOVEMBER,MONTANA officials dispatched a regular serial killer of a wolf, a 106-poundmale that had killed an estimated 120 sheep in Dawson, Garfield and McConecounties. Ranchers were on edge, wondering if their livestock would be next;many speculated it had to be more than one wolf, since so many sheep had beenkilled. However, Carolyn Sime, head of the Montana Fish, Wildlife and Parks’wolf program, told the Billings Gazette, “We do think it was a single animal, and this chapter is closed.”

Janet McNallyraises sheep in Pine County, Minn., and expanding wolf populations invaded herarea in 1991. During one week in May 1999, wolves gobbled 40 of her lambs.McNally discovered that a pack of some 23 wolves lived nearby. “The areawas just saturated with wolves,” McNally says. “Our deer populationtook quite a hit, too.”

Since then,McNally has invested in more guard dogs, nine of which protect her pastures. Asa result, wolf kills are way down, but at a cost. “I estimate that since 1991, I’ve spent nearly $36,000 keeping my flock safe from wolves,” shesays. “Preventing wolf depredation is now my second-largest budget item,after feeding the flock.” Her big fear? The return of a 20-plus wolf pack,unafraid of her dogs. “As I found out, a mega-pack can arrive on shortnotice,” she says.

TWO FAMILIES HAD THE SHOCK of their lives at Ontario’s Lake Superior Provincial Park in Canadalast September, when they were attacked by a lone wolf. The incidents occurredat the park’s Katherine Cove, a favorite picnic and swimming area. A male wolfsuddenly appeared, clamped its jaws onto the tiny arm of a 3-year-old girl andtried to drag her away. Luckily, the girl’s grandparents chased off thewolf.

The wild canine then headed down the beach toward Brenda Wright and her two young children, whohad just finished their lunches. With no warning, the wolf lunged at Wright’s12-year-old son, ripping into his buttocks. It then bloodied his sister’s scalpand slashed into the hands and legs of Brenda Wright as she attempted to protect her children.

“I was trying to fight [the wolf] off, and he grabbed my finger,” Wright told the Globeand Mail. “I thought he pulled it off. Honest to God, it looks likehamburger meat.” Park superintendent Bob Elliott shot the wolf shortlythereafter. Elliott told OL that the 73-pound male was relatively young andtested negative for rabies.

The park has seena steadily growing number of wolves in recent years. Elliott, an experiencedoutdoorsman, has even seen a few while he was out hunting as well. However, headds, no one had reported any wolf problems until the beach attacks.

As for why thewolf did it? “I don’t think anyone can ever answer that,” Elliottsays.

WISCONSIN HUNTER ROB STAFSHOLT watched from afar as the black bear crossed the road, followedclosely by Stafsholt’s two baying hounds. As soon as the hounds reached theother side and dove into the thick forest, the baying stopped. Stafsholt rushedover to see what had happened to his dogs, but it was too late. Hishounds—12-year-old Chuck and 5-year-old Sadie—lay torn and bloody, victims of anorthern Wisconsin wolf pack.

“It was a veryemotional time,” remembers Stafsholt, 30, of New Richmond. “You put allkinds of time and effort into trying to develop a good dog, and to have it alltaken away by a timber wolf? That’s unacceptable.”

Stafsholt, whosehounds were killed in August 2004, near Clam Lake, has had a good deal ofcompany. From 1986 through fall of 2006, northern Wisconsin timber wolveskilled 95 bear-hunting hounds. According to Adrian Wydeven, Department ofNatural Resources endangered-species biologist, the state has paid hunters justunder $200,000 for wolf-killed hounds.

“It’s our single biggest expense for the [endangered species] fund,” says Wydeven.With a population of between 465 and 500 wolves, Wisconsin has far exceeded the federal recovery goal of 350 wolves. But delisting takes a while.

“It’s beingheld up for political reasons and by lawsuits, basically,” says Stafsholt,who is a board member of the Wisconsin Bear Hunters Association, “and not because of good, sound scientific data and reasons.”