What to do if you become stuck with your vehicle in the middle of nowhere. 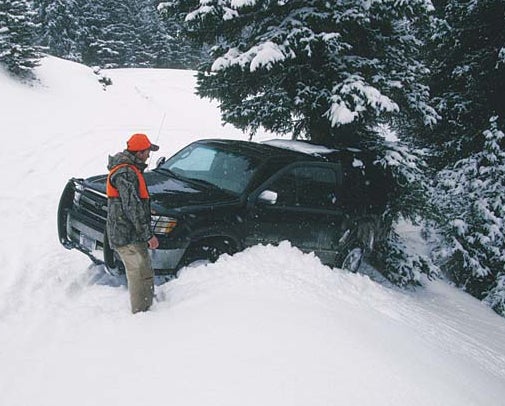 Last winter the country’s media were saturated with the story of the Kim family, who had disappeared somewhere in the coastal mountains of Oregon. For more than a week, friends and family members tried to locate the couple and their two young children. Search helicopters and teams on the ground combed the area.

News broadcasters asked the public to keep an eye out for the missing family. Meanwhile, at the far end of a lonely, snowbound forest road, 35-year-old James Kim, his 30-year-old wife, Kati, and their daughters, Penelope (4 years) and Sabine (7 months), were stranded in their car, hoping someone would rescue them.

For eight desperate days they waited. Nobody came. On the ninth day, James decided they had waited long enough. Convinced that nobody was going to find them, he left his family with the vehicle and walked away, to hike out in search of help. Shortly after he left, a helicopter search team spotted the car and rescued Kati and the girls. A couple of days later, the body of James was found in a ravine.

This incident raises several questions: If you are stranded, how long should you remain with the vehicle before you abandon it and hike out in search of help? If you decide to leave the vehicle, what should you do first? And what preparations should you make before the trip even begins?

Before you set out on a trip, prepare a detailed itinerary to leave with friends or relatives. It should include your intended routes of travel, overnight stops and any intended campsites. The Kim family did do this, and that gave them every reason to expect that people would come looking for them when they didn’t show up at their planned destination. The problem was that the Kims had deviated from the plan and ended up many miles from where they had said they would be.

If, along the way, you decide to change your plan, notify the people you left the original plan with.

Statistically, there is no question that if you become stranded or lost you are better off staying with the vehicle. It offers shelter from the elements, contains all of your supplies and is easier to spot from the air or from a distance on the ground than an individual. The best procedure is to use the vehicle as a foundation around which you set up a livable camp, utilizing the things you have in the vehicle. Always carry basic emergency supplies.

The FreeCharge Weza from Freeplay is a portable energy source that is charged by your own leg power. Step down on the lever a few times to spin the generator and provide enough power to jump a boat or automobile battery. There is also a 12-volt output, and it comes with an AC adapter. (ccrane.com; $295)

Use every possible signaling device available, both audio and video–cell phone, CB radio, whistle, horn, signal mirror (a compact disk will work), brightly colored equipment laid out in a clearing, colored cloth as a flag.

Also use smoke and fire. In an open space, carefully prepare a signal fire and keep it going all the time. Add green foliage during the day to create white smoke, and burn oil or rubber to create black smoke.

How Long Do You Stay?

The general rule is that there must be a very compelling reason for you to leave the vehicle behind. In life-or-death situations, hiking out immediately to get help might be the best option. In non-life-threatening situations, before abandoning the vehicle, you must be absolutely certain that nobody is going to come looking for you, perhaps because you failed to let people know when and where to look, or because you’re not where you’re supposed to be. In such a case, it might be best to abandon the vehicle earlier rather than later, before you succumb to malnutrition or hypothermia.

If you decide to hike out for help, prepare yourself mentally for the hardships that lie ahead.

How to Hike Out for Help

Before leaving, draw up a detailed written plan of your hike. Leave a note, with the following information for everyone in your party, attached to the vehicle:

• Time and date you left the vehicle.

• Your name, address and phone number, so family can be notified.

• Your state of health.

Follow roads or trails where you are likely to encounter other people (often it’s best to go back the way you came). A road or trail is not only a logical place for searchers to look, but is also an easier place for search teams to spot someone on the ground. Do not wander into the forest or look for shortcuts.

For some reason known only to James Kim, he left the road and descended into a ravine. Maybe he thought that by following a watercourse downstream he would come to civilization. My personal belief is that he suffered a tragic breakdown of judgment, induced by hypothermia, which was brought on by more than a week of malnutrition, exposure to cold and physical exhaustion. It could happen to anyone, and it doesn’t diminish his heroic effort to save his family. It’s almost certain that if he had simply followed the road, he would have had the best chance of encountering help.