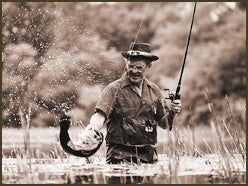 I phoned Homer Circle recently to officially welcome him to OUTDOOR LIFE. After 35 years as angling editor at Sports Afield, Homer is joining the OUTDOOR LIFE team as our new Bass columnist. We are greatly honored and I wanted him to know it. I also wanted him to know that not every New York editor has three heads and a Brooklyn accent.

As the phone began to ring at Homer’s house, I considered telling him about the great group of famous fishermen, past and present, he’d be joining. Among them are people like Ray Bergman, Joe Brooks, Zane Grey and Lee and Joan Wulff, not to mention Jerry Gibbs, a fishing icon in his own right and outdoor life’s Fishing Editor for the past 29 years.

But as I heard Homer pick up the receiver I realized he probably knew all this stuff and that I’d just sound silly. So we talked about fishing instead.

Me: When did you first get bitten by the fishing bug?

Homer: I started fishing when I was 12. Those were the Depression days, and bass was a food fish. I used an old bamboo pole that I’d bait up with mulberries when they were ripe enough to hit the water, cause that’s what the fish were feeding on. It was all fun, but mostly I went fishing to bring home something for the family to eat.

Me: How did you start your writing career?

Homer: I began in 1940 as the sporting editor for a newspaper in Springfield, Ohio. My kindly old city editor said, “Homer, you have a way with words. Just remember to write the words the way you talk, so people can stroll through them and not have to climb over big words.”

Me: What’s your favorite freshwater fish?

Homer: It has to be bass; they’re just so challenging and unpredictable.

Me: What about saltwater?

Homer: No question, it’s the tarpon.

Me: What’s the secret to staying married? (Homer and his wife, Gayle, have been married for 65 years).

Homer: Keeping love alive. I’d also say that taking my wife on 80 percent of my fishing trips has helped, and not getting piqued when she catches the biggest fish or the most. Guides ask me, “Aren’t you supposed to be the expert? She’s outfishing you.” To which I always reply, “Of course-she’s had the world’s greatest coach.”

When I hung up the phone I had a smile on my face, not just for what Homer had shared with me, but for what I know he’ll bring to anyone who loves to fish as much as he does. And, like his old city editor said, his words are a wonderful walk through the fishing world.