A Bear in the Dark

Everyone has a bear story to tell. Here's mine. 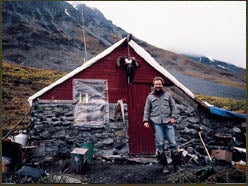 Call it a grizzly fascination, but no other animal has held Outdoor Life readers more spellbound over our 106-year history than the grizzly bear. And for good reason: Few creatures rival the great bears when it comes to raw power and, indeed, beauty. And like our caveman ancestors, we love to tell bear stories.

One of my more memorable grizzly encounters took place during my first sheep hunt in Alaska. I was hunting out of base camp, deep in the Alaska Range. Stone Camp was a comfy little place with a rock foundation and framed walls covered with Visqueen. Inside were a couple of bunks, a propane range and provisions enough to hold out for a few weeks if the weather got bad.

Fresh meat and produce were stored by the front door in a 50-gallon drum chained to the outside of the framework, its top wired shut to prevent marauding bears from helping themselves. We’d load up on supplies and then backpack six miles to a spike camp to hunt for several days, returning to Stone Camp to reprovision when our grub ran out.

One evening we returned home dead tired. With Stone Camp in sight all I could think of was getting home and ditching my pack. My guide, however, insisted we stop to glass the camp from about a half mile away-a smart idea when you’re operating in grizzly country. Sure enough, Stone Camp had been hit. A large bear had managed to work his head and shoulders through the window and had grabbed everything he could get his paws on, including the dishwashing soap, which he promptly devoured along with various canned goods before barfing all over the place.

“That bear will be back tonight,” the guide said, as we each chambered a round and double-checked our safeties.

Our friend didn’t return that night, but just after we killed the Coleman lamp a few nights later, we heard something big snapping twigs in the darkness outside. Each of us had a rifle at his side, the muzzles pointed straight at the front door (as if the bear couldn’t simply poke through the thin plastic sheeting and open our little hut like a pack of deli meat).

I realized things were getting a bit more serious when the bear began slowly to work his way around the perimeter of our shelter and stopped by my head. Through the plastic sheeting I could hear the low in and out of his breathing as he tested the air. Glancing sideways I could just make out my guide sitting upright in bed, an unlit flashlight in his hands. In those days you could legally shoot a bear that was continually wrecking your camp. This one had hit Stone Camp several times. Suddenly there was a great wrenching and squeaking of framework. The walls rocked violently back and forth as pots and pans clattered to the floor. The bear had grabbed hold of the 50-gallon drum and was trying to tear it off the side of the cabin. About this time we swung into action. The guide threw the door open and hit the light. I pulled the rifle to my face and thumbed the safety off, searching for a target, but the bear was gone.

At daybreak we followed the great clawed footprints across the glacial moraine that spread out in front of camp like the surface of the moon. The trail just continued on-up and up- finally disappearing in the jagged teeth of the mountaintops across the valley. The bear never came back, and in a way, I’m glad. I like to think he’s still out there, wandering in the snowy wilds of the Alaska Range.

Why does our fascination with grizzlies continue? Perhaps it’s because they remind us of that secret part of ourselves that longs to be something the grizzly bear has always been- indomitable, wild and free.