This is one of the most exciting months to be outdoors 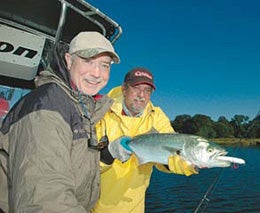 August is one of my favorite months. The days are long, the nights (depending on where you live) are beginning to cool and the promise of autumn and all it offers sportsmen lies just ahead.

Out West, the early bow seasons are beginning to get under way. Elk are talking, trout streams are gin clear and there are spruce grouse and ptarmigan to be had in the high country. Down South, the bass season is still wide open, and the early deer seasons are right around the corner.

Up North, pike and walleyes are the big focus, while here in the East, if you’re anywhere near the coast, you’re going to find hungry stripers and bluefish churning the waters to a froth.

This issue, Fishing Editor Jerry Gibbs focuses his attention on a pair of his favorite late-summer/early-fall haunts for striped bass. I had the chance to fish Rhode Island’s Narragansett Bay with him and Captain Jim White last September and had one of my most enjoyable days on the water ever.

We hit the tide just right one morning after motoring up one of the bay’s small inlets, and both stripers and blues took everything we threw at them on every cast, with all three of us hooked up nonstop for nearly an hour. It was simply an awesome experience.

Those of you in the market for a new bow will find all of the latest models tested and ranked by our panel of experts in our annual bow test. Then, on outdoorlife.com, you can view special behind-the-scenes video footage of the test. And for anybody who’s in the market for new gear, our “Wise Buys” feature takes the sting out of shopping by presenting the best deals in gear anywhere, along with some of our staff’s personal favorites.

Finally, there has been considerable argument of late, even among the ranks of sportsmen, about “black guns” and whether they have a legitimate place in the hunting world. Jim Carmichel weighs in on the argument in this month’s Shooting column, explaining that Americans have always had a love affair with their service rifles and that AR-15-type guns are no different. They’re here to stay, he explains, as well they should be.

But a huge misconception still remains, both within the hunting world and certainly in mainstream America, about what these guns actually are and why we should be allowed to own them. To shed some light on this subject, we asked hunter and black-gun expert Michael Bane to give us his perspective on the world of AR-type rifle shooting, how gun-control advocates are using the widespread misconceptions about these guns to attack our Second Amendment rights and why, as hunters and shooters, we should be celebrating this fastest-growing segment of the shooting sports instead of questioning it.