A sportsman's guide to the Lewis and Clark trail. 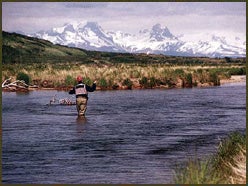 Scarcely more than 200 years ago, the Wright brothers had not yet been born, indoor plumbing and electricity were but a dream and the vast region stretching from St. Louis to the Pacific Coast was known as Terra Incognita. Our nation was not yet 30 years old in 1803, and Thomas Jefferson had just been elected our third president.

Jefferson was a substantial landowner. He was also a great scholar, his personal library being among the best in the country at that time. But what truly places Jefferson among the handful of our greatest presidents was his incredible vision.

Jefferson saw the threat to the newly formed United States from the French, the Spanish and the recently defeated British-all of whom were eager to discover a trade route linking the Eastern seaboard with the West. This would open the way for both the exploitation of the fur trade and the settlement of lands west of the U.S. by foreign governments. He had to act swiftly.

Jefferson had already backed several expeditions to explore the West, but all had failed. This time, he would choose a man whom he knew well, someone who had great skills as a woodsman and a thirst for adventure. His choice of a leader had to be disciplined, educated and above all trustworthy. He found just such a man in young Meriwether Lewis. Lewis had spent four years in the army and was well acquainted with leadership and the logistics of moving men and equipment. During his service he had done a great deal of exploration in the Ohio River valley and surrounding wilderness. Lewis was a born naturalist, an expert with map and compass, a talented writer with an eye for details, a skilled hunter and a consummate woodsman.

Together with William Clark, whom Lewis had befriended when he had been previously assigned to Clark’s rifle company, the two set out in May of 1804. Although little heralded at the time (Jefferson actually had to sneak the $2,500 appropriation for the expedition through Congress), the expedition was to become as important a milestone in history as Columbus’s voyage to America and man’s first steps on the moon. Lewis and Clark’s “Voyage of Discovery” not only answered questions about what lay beyond the Great Divide; it showed the great promise (and riches) that might be gained by settling the West under an American flag. In the months ahead, we intend to take you on the ultimate adventure as we retrace the footsteps of Lewis and Clark-for the first time ever-from a sportsman’s perspective. Led by executive editor Colin Moore, we’ll hike, ride and paddle our way from St. Louis to the mouth of the Columbia. Along the trail you’ll fish some of America’s best waters and hunt some of our richest gamelands-many of which are little changed from the days when Lewis and Clark made camp there. In this issue and each of the next eight, a special Lewis and Clark feature will tackle a portion of the famed trail. In addition to archival photos, descriptions of interesting landmarks and excerpts from the duo’s original journals, each segment will contain a detailed map with icons pinpointing some of the best sporting opportunities.

In the end, the Lewis and Clark series will provide Outdoor Life readers with not only a sportsman’s perspective on the historic expedition but a blueprint by which you can plan your own adventures into what we now know as a paradise for hunters and fishermen, the American West.

P.S._ Don’t miss the premiere of the TV series_ This Happened to Me! Thursday, Oct. 2, on the Outdoor Life Network.