Even mistakes can make good memories. 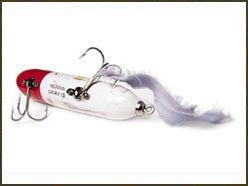 Fond memories are like fine wine; they’re one of the few things that get better with age.

I was reminded of that the other day while rummaging around in the garage with my son, Jack. “Can I see what’s in your tackle box?” he asked, pointing at the old green plastic Plano on the shelf. “Sure,” I said, pulling it down.

I watched Jack’s face light up as I raised the lid to reveal my treasures-yellow Hula Poppers, wriggling plastic worms and neon crankbaits.

Lifting an old red-and-white Lucky 13 out of the dividers, I asked Jack if he noticed anything funny about the lure. “It’s missing one of its hooks,” he said, pointing to the hookless eye that poked out of the lure’s tail. “There’s a story to that,” I said.

A Big Mistake
_ Back when I was about 15, my father took me on a fishing trip to Oregon. We’d been told there was great bass fishing at some lakes just inland from Coos Bay. We found the lakes and rented a small boat with a little outboard. To my delight, Dad handed me the tiller as soon as we were clear of the marina and said, “Open her up.”

After I blasted through the first dozen or so good-looking spots at full throttle, however, he suggested I ease back a tad, so at the next stop I killed the motor and quietly rowed us in to a hidden cove rimmed with patches of lily pads. “This looks perfect,” I whispered. My father nodded his approval from the bow as he made his first cast.

I began working a brand new Lucky 13 off the stern, hoping I’d beat him to the first fish. I was just finishing a retrieve when Dad whispered, “Ease us up a bit,” pointing with his rod tip toward a large opening in the lily pads up ahead. I reeled the big plug up to the tip-top and manned the oars.

We started out fine, but something began slowing us down. Looking over the stern I saw we were dragging a big clump of lily pads. I stowed my rod (taking special care to lay it inboard with the tip up and forward), eased one of the oars over the side and began to push the mass of weeds off the prop.

I had just about freed us when my oar hit bottom. “Perfect,” I thought. “I’ll just give us a little shove and…”

In the moment that followed, three things happened: The huge clump of lily pads finally released us from its grip, which was great; the boat shot forward-no big deal; and my father did sort of a quick sit-down on the forward seat. Again, no big deal. In fact, a moment later he shot bolt upright. “Boy, he must really like this spot,” I thought. Then he screamed.

That’s when I noticed my brand new, red-and-white Lucky 13 dangling from the backside of his trousers. Epiphanies are funny things. The moment he howled, I knew instantly that the way I had so carefully laid my rod on the seat had placed that Lucky 13 on a collision course with Dad’s backside.

The ending of this story isn’t nearly as fun to tell as the beginning. I did my best to calm Dad down as I clipped the Lucky 13 off my line. Slitting Dad’s pant leg open with my pocketknife, I remember marveling (to myself) that there wasn’t much blood, considering that two of the gnarly treble hooks were buried right up to the eye in the meaty aft part of his right thigh.

“How bad is it?” Dad asked, the anger in his voice now rising to a higher note of genuine pain.

“Nothing to worry about,” I lied. “I’ll have you fixed up in a jiffy.”

I had just put my hands on the rusty old pliers we kept in the tackle box when Dad suggested that I get him to a doctor. Judging from the grayish hue on his face, I concurred. Turned out the doctor was an angler, too. He even showed us the collection of lures he’d extracted from various body parts of hapless fishermen. Ten minutes later Dad and I were on our way… _

Back in the garage, I put the Lucky 13 in its place again. Jack carefully folded the shelves of the battered old taackle box and closed the lid.

“I never fished with that lure again,” I said, my voice trailing off.

“Not nearly as brave as your grandfather was,” I smiled.