Out of Thin Air

In bush planes, anything can happen. 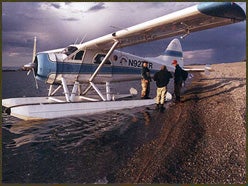 Flying into the backcountry is perhaps the ultimate outdoor adventure, so it seemed fitting to salute those who proudly call themselves “bush pilots” in this, our adventure issue.

I’ve had my share of close calls in bush planes, but the one that still makes my knees go weak happened in northern Canada years ago when we hooked up with a young pilot who had just gotten his wings. He was extremely cautious, taxiing seemingly forever before takeoff until all the gauges on his old de Havilland Beaver showed that the optimum operating temperature had been reached. He dropped us on the shore of a remote lake, vowing to return in three days.

True to his word, he taxied in three days later. He meticulously loaded all of our gear, then instructed each of us where to sit to balance the load before readying for takeoff.

The lake was very long, yet just wide enough that you could take off across its width if the wind was right. On this day, however, it was blowing down the length of the lake, so our young pilot taxied to the end, turned into the wind and pushed the throttle forward. The old coffee-mill engine wound up and we gained speed.

Getting a floatplane airborne takes special skill, because the pontoons actually stick to the water. First you pull one pontoon off to break the suction, then the other. Our young pilot performed this maneuver easily and the lake dropped away below us.

That’s when the engine stopped.

You’ve never heard quiet until you’ve heard an airplane engine quit. All you hear is the wind flowing over the wings and the panicked thumping of your heart as you realize the prop has stopped, your aircraft is hurtling earthward and if the situation doesn’t improve in, say, the next millisecond or two, it’s going to get really ugly.

A de Havilland with pontoons has the glide ratio of an anvil. Once the power stops, those big pontoons start dragging the air like an anchor. The nose suddenly dropped, which gave us a spectacular view of the rapidly approaching water. Our young friend at the controls, however, kept his cool and, while fiddling with everything but the parking brake, pulled back on the yoke to keep the nose up. The pontoons grabbed the water and we soon glided to a halt, the gentle slap of the waves sounding like thundering surf above the silence in the cabin.

“What happened?” I asked incredulously, staring at our pilot, his white-knuckled hands still throttling the stick in a death grip.

“I forgot to switch tanks,” he whispered, his voice choking back tears.

As any seasoned bush pilot will tell you, the one thing you must never forget is to check the fuel gauges before takeoff and switch over to a fresh tank if the one you’ve been running on is getting low. Our young friend didn’t, and his inaction nearly killed us.

He’ll never make that mistake again, but the cost of the lesson still brings on a cold sweat when I think about what might have happened had we taken off across the short width of the lake. About the time we would have cleared the trees the engine would have quit and the forest below would have ripped our plane to pieces.

We probably make more of these tales than is really necessary, however. After all, most of the pilots I know are very safe and never push their luck. Still, as Chris Batin’s feature, starting on page 64, will tell you, “Stuff happens.” Yet I believe the whole adventure of heading into the wilds by bush plane would lose some of its appeal if there weren’t just the slightest chance that something could go wrong.

In the end we’re all addicts where adventure is concerned. That’s what keeps us coming back for more. Happy landings.