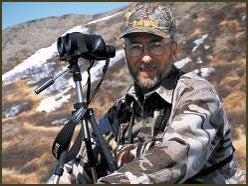 This month I am pleased to welcome bowhunting expert Dwight Schuh to Outdoor Life. Actually, I should be saying “welcome back,” because Schuh’s return to Outdoor Life is a bit of a homecoming.

The first time I heard about Dwight Schuh was in the early 1980s. At that time he was already a legend among elk hunters. Bowhunting was beginning to take off and my Colorado buddies were just learning how to play with elk calls. Bugling was the big thing then and only a few savvy hunters were experimenting with cow calls during the rut. I had just joined what was then Petersen’s Hunting magazine and heard about this guy who hunted elk in his stocking feet.

“Man, he must be dedicated,” I thought. Then a couple of my associates hunted with him and the stories that came back confirmed that Dwight Schuh was the genuine article-fiercely dedicated, incredibly creative and willing to go to unbelievable lengths (both physically and mentally) to hunt elk. Dwight joined Sports Afield as its bowhunting columnist in 1989 and remained its archery expert until the magazine’s recent breakup.

In 1996, he became the editor of Bowhunter magazine and has helped maintain that publication at the top of the bowhunting field. Over the years, we’ve gotten to know each other professionally, and if there’s one thing I’ve learned about Dwight Schuh, it’s that he doesn’t willingly talk about himself. In fact, I never realized that he had had a long-standing relationship with Outdoor Life until I read a recent interview with him by Roger Phillips of the Idaho Statesman on the Internet. Turns out that one of Dwight’s first stories for a major outdoor magazine (“Confessions of a Bullhead Buff”) was published in Outdoor Life in 1973. Dwight eventually became OL’s Western editor in 1979, shortly after finishing his journalism degree at the University of Oregon. “I thought that job would last forever,” Dwight was quoted as saying in the recent article. Unfortunately, the magazine reorganized and he was let go, but that only served to springboard him into what has been an incredible writing career.

Since that time he has published nine books, written more than 1,000 articles, appeared in numerous videos and taken his expertise on the lecture circuit to share with hunters everywhere. His hunting credentials are equally impressive. Schuh began hunting at age nine with shotgun and rifle, but since 1969, when he finished serving three years of military service with the Army, he has hunted almost exclusively with a bow. His bowhunting adventures have since taken him to 20 states (including Alaska), 6 Canadian provinces, Mexico and Africa. He has taken over 100 big-game animals with both high-tech and traditional archery equipment-21 species of North American game and five African big-game animals. Perhaps most impressive is the fact that, except where a guide is legally required, Schuh’s hunts have been almost exclusively self-guided and on public land. He was elected to the Bowhunters Hall of Fame in 1998.

What impresses me most about Dwight Schuh, however, is his respect for the sport of hunting and for the animals he pursues. This guy’s ethics are a model for all of us to follow, which is one of the reasons we’re so proud to have him rejoin our team here at Outdoor Life. As his many books and articles attest, he certainly has strong writing skills, but what you’ll enjoy about Dwight’s writing is that it isn’t flowery or frilly. It’s straight-ahead, gritty, tactical and practical-the kind of writing you’d expect from someone who recently described himself by saying, “I’m just one of the guys out there hunting.” That’s why I believe Dwight Schuh is going to fit right in with hunting experts like Jim Zumbo and Jim Carmichel. Welcome back.