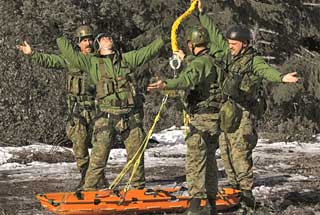 As this is being written, the body of James Kim has just been recovered. You may recall the story of the San Francisco family who took a wrong turn on the way home from a Thanksgiving vacation in Oregon and ended up stranded in their car for 11 days. After 7 days Kim tried to hike out to find help, but for reasons we will never know he left the road he was walking out on and ventured cross-country down into a steep, riverine area where, we can only assume, he became disoriented. Eventually he succumbed to hypothermia. Such a sad, sad ending to what all of us had hoped would be a happy reunion with his family.

In the past week I have been asked to do a number of television appearances, and in every case the reporters have asked me, “Why?” Why didn’t Kim stay with the vehicle and his family? Why didn’t he keep a huge fire burning day and night? Why, when he chose to finally hike out, did he leave the road and venture into such treacherous terrain?

It’s easy to play Monday-morning quarterback. None of us will ever know what James Kim was thinking. For those of you who are parents, it’s perhaps a bit easier to put yourself in his place. Here was a young man who had waited seven days to be rescued. He did a lot of things right. He tried to keep a fire burning (in fact, he ended up burning all of the car’s tires in an attempt to create billows of smoke that rescuers might see). He conserved what food supplies he had and, I’m sure, did his best to keep his family from becoming too frightened. But by day seven he had had enough. Food had run out and he was no doubt exhausted, cold and very hungry. His wife at this point was nursing both their daughters-one age 4 and the other 7 months. How much longer could she do so without adequate food?

I suspect that when there was a break in the weather he decided to make a run for it. I can only imagine how agonizing that decision must have been and how gut-wrenching his departure from his family was, knowing he might never see them again. But I think he was determined to do what any of us would do in similar circumstances-whatever was necessary to save his family, even if that meant risking his life.

In the end, Kim made the ultimate sacrifice as a father and a husband. His journey was nothing short of superhuman-he traveled nearly 10 miles with no food and scant clothing, over steep ledges and through icy waters. Is there a reason such tragedies happen? I can’t say. But I do believe they can help prevent others from suffering a similar fate if we learn from them and equip ourselves with the proper knowledge and gear. That’s why we’re dedicating this survival issue to James Kim and his family. In it you’ll find advice from three of the most knowledgeable survival experts in the field. You’ll also find a wealth of tips in a quiz by survival editor Rich Johnson and an extensive survival section on our Web site, outdoorlife.com, that speaks directly to being stranded in your car.

We can’t bring James Kim back, but we can learn from his heroic efforts and perhaps save other lives in the future. For those interested in helping Kim’s family, you may make donations to the James Kim Memorial Fund.