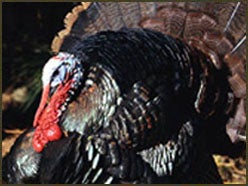 While Vermont is famous for its pastoral rolling hills, in its southwestern corner near the New York state border run the rugged Taconic Mountains, home to the highest densities of wild turkeys in the state. The mature oak and hickory forests here offer nearly ideal habitat for the birds, but the steep-sloped climbs up some of the state’s tallest mountains are not for out-of-shape legs or the weak of heart.

The Taconics in Vermont run from Rutland to the Massachusetts border and west of the Valley of Vermont, where Otter Creek flows north to Lake Champlain and the Battenkill flows south. U.S. Route 7 is the main north-south highway in the region, with plenty of campgrounds, inns, motels and facilities along it.

Vermont’s spring season typically extends through the entire month of May, with a season limit of two bearded birds. In the autumn, the Taconics have a 16-day shotgun season in late October and early November, and the birds can be hunted with archery equipment for two weeks earlier in October. The fall limit is one turkey of either sex. The state’s free Hunt Vermont official map and guide is particularly helpful. The only costs are for a nonresident hunting license ($80) and a nonresident wild turkey permit ($20).