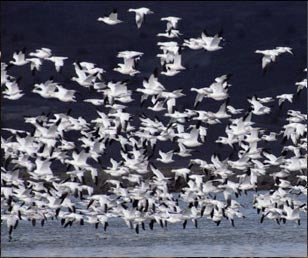 The boom in the North American snow goose population has seen the birds’ numbers rise from about 50,000 in the late 1960s to a few million today. It also has provided unprecedented hunting opportunities in Maryland and Delaware, where hundreds of thousands of the birds migrate.

Game managers have increased the daily limit to 15 birds. They also have maximized the effect of hunting in both states by splitting the season into three segments — autumn, winter and late winter.

The highest concentrations of birds are found on the Delmarva Peninsula, including the eastern shore of Chesapeake Bay, the western shore of Delaware Bay and the extensive croplands scattered along the peninsula.

Public hunting lands are abundant in both states, with each state having extensive lists and guides. Contact them for maps, regulations and advice on hot spots. In addition, the U.S. Fish and Wildlife Service offers superb hunting on its Bombay Hook National Wildlife Refuge in Delaware.

Landowners, specifically farmers who grow winter wheat, usually are receptive to goose hunters who ask permission to hunt their fields because of the devastation a flock of snows can wreak on a crop in short order. Maryland and Delaware have a reciprocal license agreement where snow goose hunters are concerned, meaning either state honors the resident hunting licenses from the other state for snow goose seasons. However, resident hunters still need state duck stamps and individual Harvest Information Program (HIP) numbers for each state. For a HIP permit, call 800-938-5263.