Death Waits in the Dark 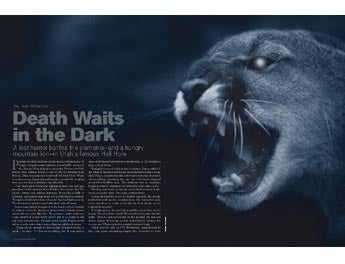 Perhaps Rudy Lopez was simply trying to keep busy. Or maybe long-dormant instincts, honed while serving in the Korean War, kicked in when the 74-year-old California deer hunter became lost in the mountains near Beaver, Utah, in a place the locals call the Hell Hole. Whatever the reason, Lopez placed branches around his sleeping area, a move that might have saved his life.

Two days after becoming separated from his son and grandson on the opening day of Utah’s deer season, the Victorville hunter was getting desperate. It was the middle of October, and Lopez was alone on a 9,460-foot mountain. Though he had run track as a boy, his legs had tightened up. The downward spiral toward dehydration had begun.

Lopez was hoping to make it to the peak of the mountain in order to rejoin his family or spot rescuers, but the mountain itself seemed to fight him. The mixture of dirt and loose rocks would let Lopez climb only 4 feet or so before it slid out from beneath him. Struggle as he might, Lopez would advance only a few steps before slipping right back down.

“I was smart enough to know that it wasn’t going to work,” he says. “So I tried something else. It was getting dark and I knew I would not make the top, so I looked for a place to bed down.”

During his second night on the mountain, Lopez settled in for what he knew would be an uncomfortable night’s sleep. At 2:30 a.m. he jerked awake as his ears picked up the sound of something crunching the dry leaves he had scattered around his bedding area. The darkness was so complete, however, that he could not see where the noise came from.

Moving cautiously, he got up and looked around, straining to see in the dark. There was nothing there. Lopez decided to move to higher ground. He slowly pushed himself up the mountainside. He wanted to gain some elevation in order to be able to look down on his makeshift campsite.

A slight noise, almost imperceptible, froze him in his tracks. Was it just the wind? He stared even harder into the night. Then he saw movement on the ground. He was not alone. Lopez picked up a rock and threw it toward the movement. Whatever he hit suddenly jumped back.

Lopez had his rifle, a .270 Winchester, cradled next to him, but years of hunting taught him it would be both dangerous and unethical to shoot into the dark at an unknown target. So he threw another rock. Nothing happened.

[pagebreak] Lopez decided to climb a nearby tree in hopes of scaring the animal away. He gathered a couple more rocks, slung his rifle and began to climb. He stayed in the tree for 15 minutes, throwing another rock and watching and listening. After some time he saw the animal move again, then lost its form in the dark. Lopez waited.

The tree started to shake. Being from southern California, Lopez was reminded of an earthquake. He held tight to the tree with one arm and gripped his rifle with the other. When the animal seemed as though it was climbing up the tree, Lopez picked out a point on the trunk. He decided that if the beast came that far, he was going to shoot.

The animal continued its climb. Lopez fired. He couldn’t aim well because he was hugging the trunk of the tree with one arm, but he figured the animal had been hit somewhere because it tumbled to the ground. The muzzle flash from his rifle had diminished his night vision, but he then saw something small moving that gave off a low growling or crying sound. His first thought was that he had just shot a mother mountain lion with a cub.

By this time, Lopez could barely make out the figure of the cougar trying to get up. A branch moved, exposing a larger part of the cougar’s belly, and Lopez pumped four more shots into the animal. He stayed in the tree for half an hour and then decided he had better move in case a male mountain lion was in the area.

Praying for Daylight
Lopez climbedd another tree and stayed there until it got light enough to see. Even though his thinking was fuzzy because of the sleepless night, Lopez knew he was in serious trouble. He could see the rescue planes and helicopters his son Rudy Jr. and grandson Anthony had summoned, but they weren’t flying close enough to spot him. Alone on the mountain, he thought of Mona, his wife of 51 years. What must she be going through?

“I was home in Victorville awaiting their return,” recalls Mona. “They do this yearly. The doorbell rang and two of my granddaughters came in in tears. My first thought was, who got shot? But they said that Grandpa had been lost. I called my daughter and we left at nine a.m. and arrived in Beaver at six p.m. They were still searching for him.”

On the third day of his ordeal, Lopez sat trying to analyze what he should do. He knew he was not supposed to move and walk all over the mountain. But he assumed the search parties were concentrating their efforts on the other side of the mountain. He could hear them flying closer, so he decided to put his hunting jacket up a tree. He found a long branch and pushed the jacket as high as possible.

As the fourth day approached, Lopez had deteriorated to the point where his body was no longer producing any fluids. His legs cramped and would not maneuver and he began to pray hard. The dehydration had advanced to where he couldn’t even talk-his throat had closed up.

[pagebreak] A Desperate Climb
Lopez saw an opening quite high up the mountain and figured his only chance was to get to the clearing, where he might be seen. He crawled up the mountainside and arrived at the opening around noon. He tried to hang another piece of clothing in a tree, but it dropped uselessly to the ground. He wanted to do more, but his body would not function.

He passed out for maybe 20 minutes before waking up again. He took off a dark jacket, figuring maybe the planes could see it. He saw a small plane make a pass. When Lopez moved, the pilot spotted the UCLA sweats he was wearing.

It took rescue crews hours to get to Lopez in his remote position. By that time, he had passed out. When searchers found him, they nudged him in the side and he grunted. They relayed the information that he was alive.

His rescuers used a chain saw to clear an opening so a helicopter could get close enough to pick up Lopez. He was lifted out and flown to the hospital in Beaver. After four days in the hospital to treat his dehydration and the other symptoms of his exposure he went home.

Lopez figures he has some unfinished business left this fall. He and his family are planning to purchase their Utah hunting licenses and head back to the Hell Hole.

“In the service you learn never to leave your rifle behind, and I left mine up there,” he recalls. “I lost my pocket knife and gloves, too, and didn’t even know it.”

Some have wondered if Lopez actually saw the lion, or if he was hallucinating. Lopez remains certain of what he saw.

In any event, he is heading back this fall. Lopez wants to reclaim his rifle and perhaps find some sign of the mountain lion that terrorized him in the night.