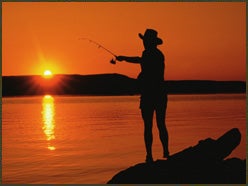 Redfish are back along the Gulf Coast! Strict new laws on netting have allowed redfish and other coastal species to recover from commercial overharvest, and fishing for them is good again.

One great area for redfish is in the marsh south of New Orleans. Millions of acres of brackish inshore waters are available to anglers who can launch their boats from any of several public access points in the area.

It’s a good idea to obtain the services of a guide before striking out on your own in the Delta. There are plenty of outfitters in the area. Bryan Dickenson operates Dixie Riverside Charters out of Buras. Dickenson guides clients who fish from a 23-foot bay boat. Reds will average two to eight pounds, and there’s always a chance of tying into a bull red that will weigh up to 45 pounds. Other fish such as speckled trout are likely to be encountered, too.