A bunch of giant non-typical whitetails were killed last fall across America-we've profiled a good few of them here at the ZONE-and more will bite the dust this November-we'll profile more. What's up with all the freaks? 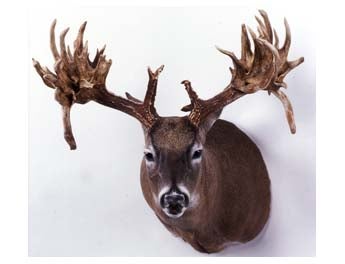 It’s weird because the average hunter hardly ever sees a palmated, drop-tined, multi-beamed, junked-up, 20-point-plus rack. I’ve hunted in 25 states and 4 Canadian provinces and have seen exactly 2, both of which I killed as fast as I could. You ever seen a big freak?

Weird racks are mostly about genetics. Dr. Grant Woods of Missouri feels that most all whitetail bucks have non-typical (NT) characteristics in their genes, though they generally don’t start to show till the deer are 4 or 5 or older. “It’s rare for a 6- or 7-year-old buck to be a straight up typical these days, especially on managed private land where there’s lots of food,” he says. Woods believes the world-record for NT whitetails (currently an almost unbelievable 333″ ) will be broken several times before the Hanson typical (213″) is topped.

Read the rest of the article…