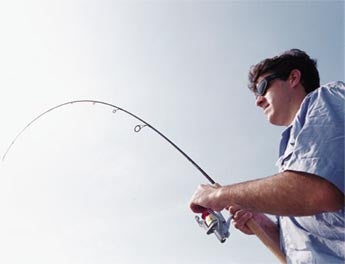 Nothing will give away the presence of rotten fish quite like its smell. Anglers who’ve spent a 95-degree day on the water with cut shad bait sizzling in the bottom of an aluminum boat understand.

But an aluminum boat is a place where one would expect to encounter a fishy smell. An airport luggage conveyor belt is quite another.

Two weeks before the fish were discovered, a man named Ray Bolanos reported 40 pounds of missing halibut from a cooler he’d checked with the airline on a flight from Anchorage to Seattle. Brenee Davis, general manager for Continental Airlines in Anchorage, suspects the fish found in the airport was Bolanos’ missing catch. Davis said baggage handlers discovered the rotten fish under the conveyor belt days after they first smelled it. Upon discovery, the airline employees promptly disposed of the fish. Davis says that Bolanos’ cooler probably wasn’t properly secured.

However, Bolanos has a different angle to the story. He says when he picked up his cooler on the luggage carousel in Seattle, the rope he’d tied around it was inside, and his fish was gone. “She (Davis) was trying to say that maybe the new conveyor chewed off my rope,” Bolanos told the AP. “It’s not something that was chewed off. It was a clear cut.”

Bolanos said that another passenger, Marian Maxwell, reported a similar circumstance with the same airline. She lost about 20 pounds of halibut, in addition to some fishing tackle and .38 ammunition. Maxwell believes her bags also were tampered with.