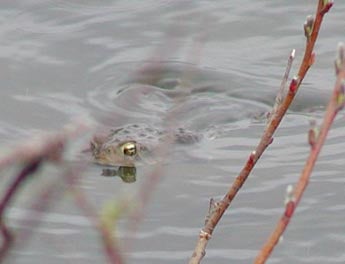 Ask a Southern boy who’s spent a few nights in a swamp with a gig and a light what would happen if bullfrogs grew to be bigger than people. He’d likely tell you that man’s seat as the supreme predator would be in jeopardy.

The fact is, there is nothing much more voracious than a bullfrog. A frog the size of a saucer really has no qualms with attacking a duckling or anything else it might deem tasty-even a housecat.

Karen MacGregor of British Columbia has seen just such a run-in with a problematic bullfrog. Her cat, Boots, treads a little more cautiously around ponds these days after an apparent attack by a bullfrog.

MacGregor told a writer for the CBC News, “She [BRACKET “Boots”] was sitting on the edge of this pond right beside this big bullfrog and I said, ‘Boots, don’t go near that bullfrog.’ I turned and went into the barn, and just a second or so later, she came hobbling in. She was crying and crying and dragging her hind leg. She was soaking wet and I knew the bullfrog had gotten her.”

Environmentalists in the area are concerned about the proliferation of the bullfrogs because they breed rapidly and eat native frog species and fish. Perhaps Southern frog giggers will be asked to help in the near future.