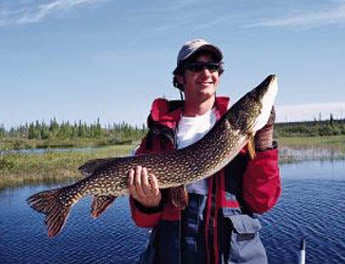 Somehow a couple of thieves were able to steal and then hide a 20-foot pike statue for four days in Des Moines, Iowa. The fiberglass pike was mounted on a trailer, to be used as a float in the town’s Octoberfest parade.

The burglars were never caught. Instead they left their stolen booty, nicknamed “Swimmy the Pike” on the lawn of the parade’s organizer. The owner of the pike, Steve Mumma, of the Atomic Garage antique store, immediately posted a $1,000 reward upon hearing of the pike’s abduction.

Perhaps the thieves were wary of the publicity and feared an imminent arrest. Regardless, the fish is returned and parade organizers are asking police not to pursue the case any further.