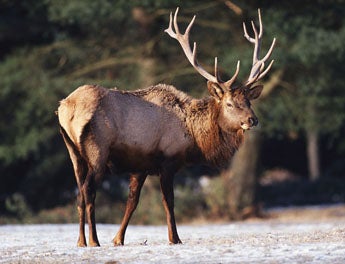 Motorists in eastern Kentucky are used to seeing deer crossing signs along state roads. In fact, the well-racked, typical buck leaping across a yellow background is one of the most common road warnings in rural areas. But residents in Clay and Leslie counties will soon see a competing sign with a larger member of the deer family, one that has not been a common sight since the end of the 1800s.

After 55 incidents where drivers have struck elk, the state decided it was time to alert folks that the cow-sized critters might be standing idle in the middle of curving, mountain roads. Kentucky officials had originally set a few signs up when elk were reintroduced to the region seven years ago, but they’ve since been stolen by people in search of a souveneir.

There’s nothing spectacular about the new design. Replace the current whitetail deer with a bull elk. The sign is representative of the success of adapting elk back to their former range.