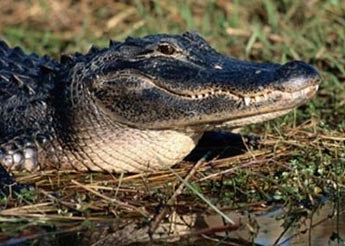 Sharing quality time in the outdoors is important for a healthy father-son relationship. Forcing your son to jump out of the boat and wrestle an alligator, though, is crossing the line. Such was the case with Jupiter, Fla., boat captain Scott Sweeney and his 14-year-old son.

The pair were on the Loxahatchee River near the Jonathan Dickinson State Park over Memorial Day weekend. An employee of the South Florida Water Management District watched as Sweeney’s son jumped into the river and wrestled a 4-foot-long alligator, eventually hoisting the reptile into the boat. The two returned to the dock where Sweeney snapped pictures of his son posing on top of the gator. Sweeney was then arrested by a Fish and Wildlife Commission officer and charged with felony counts of illegal possession and capture of an alligator and child abuse. He also is facing a misdemeanor count of unlawful transportation of an alligator. Sweeney was released on $10,750 bond.

In the police report Sweeney said he was proud of his son, stating, “That’s my boy, fourteen years old and no fear.” He also admitted that he brought the alligator aboard the boat and knew that he was breaking the law. Sweeney claims that he was planning on moving the gator downriver since it was getting to close to the public beach.