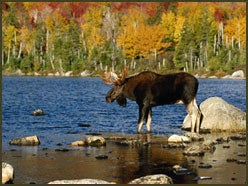 In the “Music Man,” a famous musical, 76 trombones led the big parade. On the Fourth of July in Brighton, Utah 2 bull moose led the parade. But they weren’t supposed to be the grand marshals. While hundreds of locals watched with surprise, and some fear, the two animals, both standing over six feet, trotted down the main route.

Luckily there were not any incidents with spectators. In fact, the moose spooked when they approached the cheering crowd. Several kids screamed as the pair of young bulls came within a couple of feet of them. Eventually the two made their way across town and back into the wilderness.