Cougar had traveled 700 miles according to a tracking collar 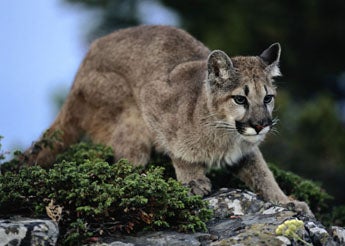 According to AP reports, a mountain lion being monitored with a radio collar it received in South Dakota was struck and killed by a train in Oklahoma. The cougar had traveled nearly 700 miles, crossing entire states before falling in Red Rock, about 80 miles north of Oklahoma City.

The 114-pound animal was being tracked by Jonathan Jenks, a wildlife professor at South Dakota State University working in the Black Hills area of the state. Along with this mountain lion, 34 other cougars have been collared. Jenks is trying to determine the ranges, survival rates and dispersal patterns of these cats.

Since September 3 of last year the lion traveled 667 straight-line miles, almost twice as far as this type of cat has been documented to travel before. This particular animal was fitted with a collar in February 2003. It was a year old and weighed about 80 pounds.

Investigators determined that the cougar had been killed by blunt trauma to the head. A necropsy revealed that its stomach contained several deer parts.