Photos of BBZ’s biggest and best bucks of 2007! Want to submit yours? Head over to bigbuckzone.com 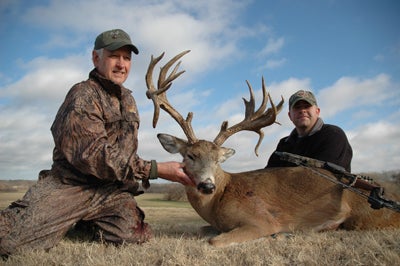 Mike & Brock Benson from Texas This North Texas father-and-son team scores huge with more than 400 inches of antler. It's simply not possible to chronicle the best Big Buck Zone stories from last season without recapping the tale of Mike and Brock Benson. The North Texas father and son scored big on a small family farm that the father has owned for nearly three decades. Last September 30, Brock, 30, climbed into a stand on a warm day hoping to capitalize on an early-season feeding pattern that a huge non-typical buck was on. On the second day of the state's archery season, the younger Benson accomplished his mission, making a 17-yard shot on a 24-point buck that gross-scored 210 4/8 inches. Fast-forward to January 4, just a couple of evenings before the 2007-2008 deer-hunting season's end in Texas. That's when 59-year-old Mike, a busy physician, decided to make a quick dash to the family farm to hunt the last remaining hour of daylight and finish the season on a high note. Barely settled into his blind, the elder Benson looked up to see three does. He also saw a big non-typical a mere 25 yards away. When the buck closed to within 16 yards, the father made good on his shooting opportunity at the 22-point non-typical-205 gross. Brock says that the hunts themselves, while exciting, were really somewhat anti-climactic when compared to all the preparation beforehand. "I guess we started getting serious about hunting our farm about twelve years ago, when we started using trail cameras and video cameras and saw what we had," Brock says. "Since then, we've devoted our time and our resources to killing a big deer through supplemental feeding, food plots, scouting and passing up on smaller bucks in the 140, 150 and 160 class so that our deer could get some age on them." Then the younger Benson added the rallying cry of nearly every BBZ reader: "It's a 365-day process to kill a big deer out there." As these stories prove, there is no doubt about that. Outdoor Life Online Editor
SHARE

Photos of BBZ’s biggest and best bucks of 2007! Want to submit yours? Head over to bigbuckzone.com