If you’re able to pull it off, there is no other feeling in the woods quite like putting a successful... 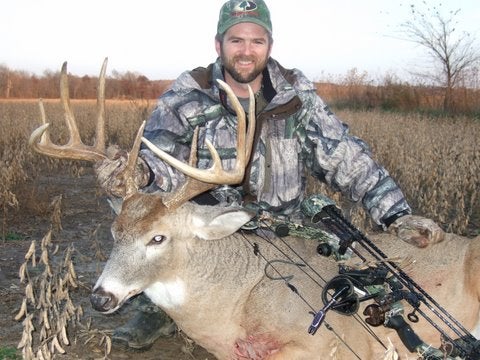 If you’re able to pull it off, there is no other feeling in the woods quite like putting a successful spot-and-stalk on a giant buck. Just ask veteran bowhunter Russell Patrick from Missouri who was able to connect with his best buck last season while sneaking and peeking.

Patrick who works full time as a concrete truck driver was facing a pretty slow season. For most of us who work, it can be difficult to spend enough time in the woods to pattern and tag a mature buck with a bow in a fair chase environment. This Missouri hunter had spent as much time as possible in the stand, but was only seeing does and small basket-racked bucks. Finally, Patrick got the break he had been waiting for while driving home after a morning hunt. He spotted a buck several hundred yards in an open field and decided to turn back around to glass the area. Unfortunately, it was only a small buck, but on the way back out a shooter buck and doe stood up on the other side of a fence line. Patrick and hunting buddy, Joe White, decided to make a move on the lovesick buck.

After a few hours, the two were unable to move in close enough for a shot and attempts to call the buck into range were also unsuccessful. Patrick’s friend had to get back to work and it looked like the hunt was over. However, a combination of perseverance and a little grit made Patrick stay in the field, go for broke and make a move. He used a waterway that cut across the field to shield his movement. The wind was perfect, but there was little cover and Patrick knew the odds were stacked against him. Another hour passed before he was able to close the distance and see the tips of the bedded buck’s long tines.

Quickly, Patrick ranged the buck at 47 yards and he couldn’t believe he had gotten this close. All at once, the doe stood up and several deep throated grunts made the bowhunter’s heart skip a beat. Then the buck stepped into plain view and Patrick released an arrow that would end one of his most memorable hunts. All of us at the BBZ respect you for choosing to stay in the woods and making something happen during a tough season. Awesome hunt buddy!