Starting At The Top

For most of us, a small basket-racked buck or a slick headed doe was responsible for igniting a lifelong passion... 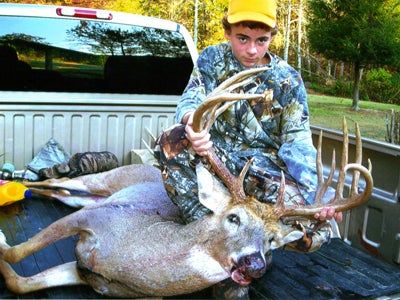 For most of us, a small basket-racked buck or a slick headed doe was responsible for igniting a lifelong passion for deer hunting. All of us know exactly how tough it can be to connect with one of those top-heavy giants that make it hard to concentrate at work during November or even sleep the night before opening day. However, some lucky hunters don’t fool around with a pencil thin spike horn or a doe when they punch that first tag.

Some of the more fortunate hunters start out at the top and smoke a buck that makes jaws drop, temperatures rise, and hearts skip a beat! This past season, 14-year old Blake Jeffers laid the smack down on a stud muffin buck that was carrying around 15 breath taking points and scored just under 190. What’s even more impressive is the fact that this giant wall-hanger buck was actually the young hunter’s very first deer.

As some of you may have guessed, poor little Blake Jeffers is officially ruined. Now, it’s hard to get this Kentucky boy to talk about anything other than hunting. He is hooked for life and completely ate up with whitetail fever. A close family friend took Jeffers on an annual draw hunt that occurs at the Kentucky Bluegrass Army Depot each season. By the time 8:15 a.m. rolled around, Jeffers already had his sights on a nice 8-point buck and was getting ready to close the deal when Hale made him back off of the trigger. That is when the super wide and top-heavy 15-point buck suddenly came into view. Like a natural, the young hunter quickly switched his sights on the biggest bruiser he had ever laid eyes on and calmly squeezed the trigger. A loud echoing shot signaled the end of a picture perfect hunt and allowed one new member to enter our sacred hunting brotherhood with an absolute giant. Congratulations Blake on a phenomenal hunt and all of us at the BBZ would like to thank the family friend Ronnie Hale for taking the time to introduce another hunter to the outdoors. That is truly what hunting is all about!