The downside to being a hunting guide is finding enough time to hunt on your own. it’s extremely difficult to... 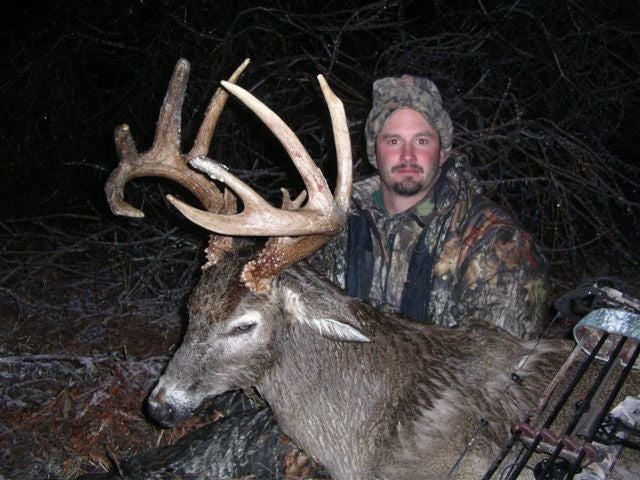 The downside to being a hunting guide is finding enough time to hunt on your own. it’s extremely difficult to find time for yourself. You still love to hunt, but you’re too busy setting up other hunters in all of your hotspots.

For most deer guides, the late-season is a period where the business really drops off and you have much more free time. In most states, archery season is just about all that is open after the rut has faded and cold winter temperatures have cleared the woods of other hunters. This is when Caleb Beard of Ross Trophy Outfitters in Kansas likes to hit the woods wide open and make up for lost time in the stand. Last season, outfitter Perry Ross and guide Caleb Beard were able to put 24 hunters right on top of some of the best thick-necked bruisers you could imagine. The river bottom land is fair chase with no high-fences, but it is absolutely loaded with monster bucks. With a hunter success rate of over 60% you can see why they have a lot of repeat business.

During a recent ice and snow storm, Beard decided to hunt a massively racked buck that was holding tight to a river-bottom thicket near a food source. It was bitterly cold and the wind would just about blow you out of the tree, but he had to take advantage of what little opportunity was left of the Kansas season. On this particular hunt, the deer were grouped up and using the thicket to escape all of the bad weather. In fact, Beard spotted at least 14 different bucks within yards of his stand before putting an arrow through this 170-class giant and ending a perfect season. Being selective and hunting right down to the last minute during the late winter months can generate encounters with massive racked studs like this unbelievable buck. Congratulations, Caleb on a phenomenal buzzer-beater buck!