I’ve told you about Nebraska whitetails before and not to ignore the Cornhusker state when it comes to whitetails. Here’s... 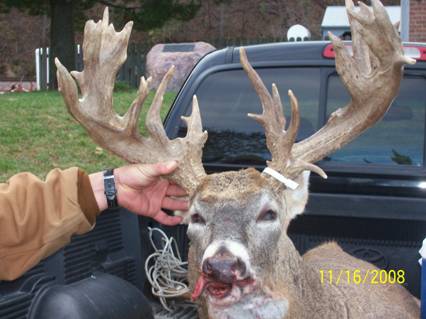 I’ve told you about Nebraska whitetails before and not to ignore the Cornhusker state when it comes to whitetails. Here’s more proof. This past fall Deanna Hellbusch of Plattsmouth was hunting nearby in Nance County. As a middle school science teacher, weekends are precious periods for personal time. Deanna was hunting with a Remington bolt action chambered for in .270 and didn’t have a clue she was about to have a date with destiny, and encounter a truly giant buck.

The first thing that comes to mind is the mass of this buck and the gnarly nature of the buck’s chunky antlers. The buck has a 16×17 frame and Deanna has it on her “to-do” list to get the buck officially scored, but regardless of the final points, here’s her story.

Deanna was hunting with her husband and father-in law on opening weekend of the Nebraska’s firearm season. On opening day the trio caught a glimpse of the big buck as they scouted their hunting property. Instead of taking a risky shot the trio put together a plan to make the buck go where they wanted him to go; not where the buck wanted to go. Even though they knew it was a risky move, the three agreed a “push” of the area was needed to make the buck move. After choosing an open area for Deanna to take a stand and get a clear shot, her husband and father-in-law circled to the opposite side of the section of land, and began zigzagging back to Deanna in hopes the big buck would move past her. It worked.

Deanna was in the right location and as the buck appeared she lined up the sights and shot, and shot again. She estimated the shots were from 150 to 200 yards away. “It took me several shots to get him down…maybe because I was shaking so bad.” Like many big buck stories, Deanna didn’t know how big the buck really was until she hustled over for an up-close inspection of him. “Thankfully I didn’t realize REALLY how big he was until I walked up to him, then I might have completely missed.” she added.

Deanna started out hunting with her husband 11 years ago and has been fortunate to take a buck every year. She started out her deer hunting career with “Spike” the mule deer and has tagged some decent bucks since, “but of course nothing like this!”

Congratulations Deanna on a great trophy and a plan well executed!