Do you still need more proof that the grasslands can produce monster bucks? Take a lesson from Josh Spies, a... 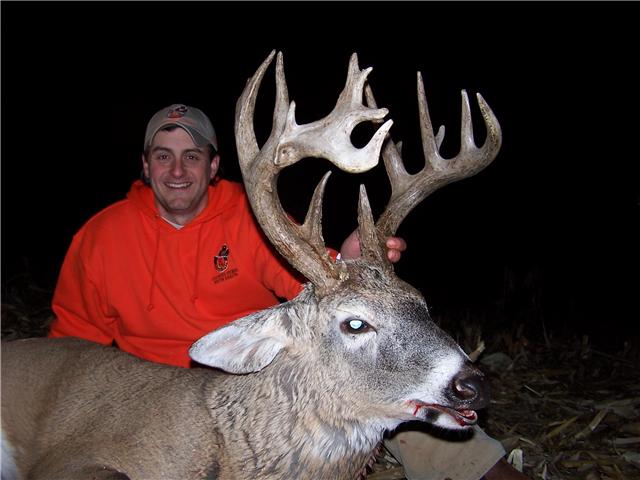 Do you still need more proof that the grasslands can produce monster bucks? Take a lesson from Josh Spies, a South Dakota native. You may have heard of Josh before, he’s the winner of the 2008 Federal Duck Stamp contest and an award winning artist with an eye for wildlife and hunting. Pioneering artist Terry Redlin was one of Josh’s mentors and encouraged the young artist into the career of art. The Federal Duck Stamp contest was the 76th annual and the new stamp will go on sale in June 2009. Josh is also an avid hunter and not only has he hunted across North America, but also across the globe (www.joshuaspies.com).

Even after trekking around the world on big game hunts Josh still sets aside time to hunt with outfitter Cody Warne. Warne Ranches (www.warneranches.com) is located 20 minutes northeast of the capital of Pierre, South Dakota. Warne manicures his property for pheasants, but also sets aside a portion of habitat specifically for the whitetails. His management includes the essentials of food and water, plus refuge…lots of refuge.

Warne keeps a close tab on the bucks roaming his property and sets a goal of harvesting only those bucks that are 5 1/2 years of age of older. During a hunt in 2008 Josh was lucky enough to meet face to face with several of Warne’s bucks.

The story actually starts during bow season. Josh set aside a few days prior to rifle season for archery action. He got it. While hunting from one of Warne’s ground setups a 175-class whitetail sporting a drop tine passed by his location at 35 yards. Josh didn’t feel right about the shot and saw that the buck was on track to pass through another opening offering a 20-yard shot. Right before the buck was going to enter the shooting lane he turned and took a course in the opposite direction. Josh was sick realizing he was seconds away from a record book buck with his bow. He didn’t have time to grieve about the encounter since he had to jump on an airplane to accept the Federal Duck Stamp Award.

Despite a busy schedule, Josh was able to return to hunt with Cody the last few days of the rifle season. Cody and a neighbor had been watching a non-typical buck Cody dubbed “Big Gnarly.” Cody estimated the buck at 5 1/2 years and had several trail camera images of the buck along with shed antlers from the previous year. Unfortunately the buck disappeared during the rut. Cody wondered if the buck had been poached. On the last morning of the rifle season Cody and Josh climbed on top of a 25,000-bushel grain bin that overlooked a standing cane field next to an alfalfa field. Cody had a gut feeling this was where “Big Gnarly” might be hiding.

At dawn the duo watched six deer walking from the alfalfa toward the cane and to their surprise, “Big Gnarly” was in the lead. With no time to spare, Cody set up a ground blind on the fence line to ambush the deer when they returned to the alfalfa at sunset to feed. Plans don’t always work, but just as the sun set a doe and fawn jumped the fence and a minute later “Big Gnarly” followed the group. The buck stepped out broadside for a perfect 120-yard shot and a “picture-perfect” ending to Josh’s deer season.