A Buck For The Ages

The month of April generally marks the time when we start thinking about gobbling longbeards or hard-hitting bass. However, as... 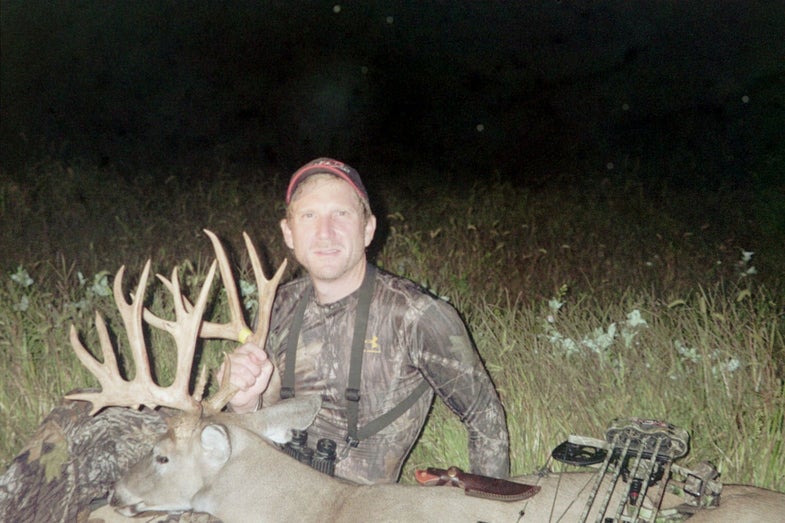 The month of April generally marks the time when we start thinking about gobbling longbeards or hard-hitting bass. However, as a diehard deer hunter, it’s hard for me to stop thinking about giant whitetail bucks or getting ready for Opening Day. This is especially true after seeing a picture of an absolute monster early-season buck that was taken by a bowhunter from Missouri last September.

Most people recognize the hunter in this picture as Chris Parrish the world-class championship turkey caller. It’s been said that with a mouth call Parrish sounds so good that he can actually spit feathers on stage. This Missouri native has won just about every type of calling competition you can imagine, but don’t let his reputation as an expert turkey hunter fool you.

Over the years, Parrish has filled a trophy room full of top-heavy bucks like this Missouri monster. Believe me this old boy is as good in the treestand as he is on stage during a competitive calling contest. Last season, Parrish spent countless hours scouting a high-racked early-season giant from a safe distance. He utilized long-distance scouting techniques that involved glassing a bean field to pattern the buck’s entry and exit routes. Intense scouting allowed Parrish to put together an early-season game plan that would allow him to intercept the buck directly between its bedding and feeding area. By the time late September rolled around, this bowhunter had the thick-racked 16-point bruiser pegged with the perfect ambush strategy.

Consequently, Parrish decided to hang a treestand overlooking a worn trail leading to the bean field. In most cases, as the season progresses, a lot of mature bucks will not enter an open area food source until just before dusk or immediately after dark. Parrish’s setup was back in the cover and gave him the opportunity to connect with the buck before good shooting light ran out. Finally, all of the pieces to the puzzle came together when the buck stepped into a cleared shooting lane just below his stand. After all of his hard work, a clean double-lung shot placed this 172-class monster on the ground. There is no question that doing your homework and spending time in the woods is really the magic formula for success. Congratulations, Chris on an amazing early-season buck that was taken the right way.