Remember the story about artist Josh Spies? Did you wonder what happened to the 175-inch buck with the drop tine?... 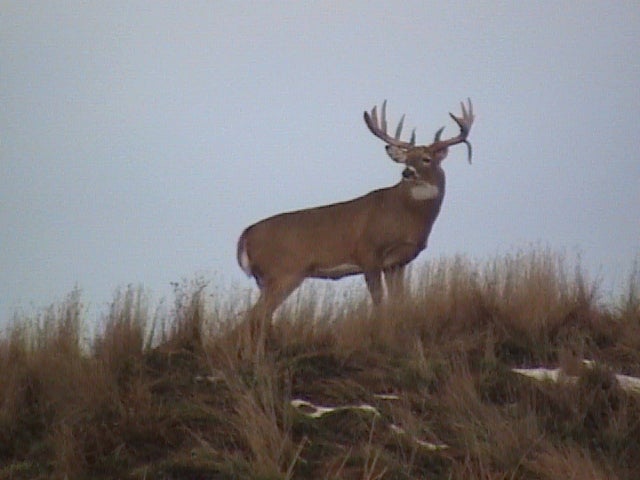 Remember the story about artist Josh Spies? Did you wonder what happened to the 175-inch buck with the drop tine? Me too? It seems that Josh’s father, Jim, also a native of South Dakota, had plans to hunt with Cody on opening day of South Dakota’s firearm season while his son was off accepting the Federal Duck Stamp award.

On opening morning Cody and Jim set up high on a prairie hill watching deer through a spotting scope. Cody was looking for several of his older bucks when he spotted a big buck a mile in the distance, but coming their way. Cody immediately recognized it as the big drop tine buck Josh had the close encounter with a couple days earlier. In fact, the buck was in the same neighborhood as the encounter.

The buck was alone and heading for a shelterbelt of trees where bucks ran an active scrape line. Cody’s hope was for the buck to come out the other end and they’d be waiting. After a long hike Cody and Jim reached the other end of the trees, but the buck was quicker and had already reached a thick patch of weeds only 100 yards from the hunters.

With buck fever surging, Jim tried to steady his rifle on his shooting sticks, but the sticks were a little short and he couldn’t see through the tall weeds. Repositioning, Jim steadied himself up against a fence post. Interestingly, the buck watched the repositioning act and didn’t spook. You gotta love the rut!

Once steady, Jim didn’t hesitate and shot the buck right behind the shoulder with his .270. The buck fled with a short burst, but dropped in sight. The drop tine made this buck a special trophy, but it also sported a 25-inch outside spread and all mass measurements were more than six inches. It grossed 175 points. Plus, this buck had nine lives. While caping it the taxidermist found a .22 bullet embedded in the deer’s neck. Some poacher is still cursing their bad luck. Congrats Jim!