As a young boy, I can remember a time when you could spend a solid week hunting the mountain country... 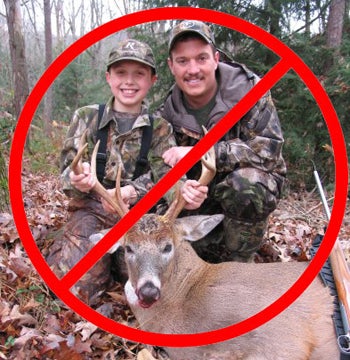 As a young boy, I can remember a time when you could spend a solid week hunting the mountain country of southeastern Kentucky and only see a few measly does. In fact, just seeing a decent buck during those days was quite an accomplishment. That was close to 18 years ago and a lot has changed across the nation since those days. Currently, there are healthy populations of whitetail deer just about every where you look and things only seem to be getting better with each passing year. People need to stop and think about what really caused this dramatic change. Well, you can bet your bottom dollar that misinformed anti-hunting organizations like “In Defense of Animals” didn’t have anything to do with this unbelievable turn around! The so-called “facts” that groups like these release on their websites and news pamphlets are amazingly pathetic.

In reality, there are thriving herds of whitetail deer due to intense wildlife management practices, habitat improvement and re-introduction stocking programs that has allowed whitetails to flourish nation wide. Consequently, the money from these projects did not come from Hollywood, PETA or other anti-hunting groups. It was the American hunter who picked up the tab and allowed state ran wildlife resource agencies to implement these costly programs. Money from hunting license and equipment sales has enabled state wildlife resource agencies to balance healthy deer herds despite major problems with human encroachment.

However, groups like “In Defense of Animals” claim to have a better management plan that involves six simple steps: (1) Ban all sport hunting nation wide. (2) Reintroduce natural predators, such as mountain lions, wolves, and coyotes to maintain existing populations. (3) Allow fires to burn naturally in wildlife areas and limit human habitations in these locations. (4) Prevent humans in residential areas and state parks from feeding deer. (5) Outlaw clear-cut logging. (6) Construct 8-foot high electric fencing around crops and plants. According to this organization, these cutting-edge techniques will control deer populations and create an even ratio of bucks to does. As a hunter and true conservationists, I have to wonder what the weather is like in the world of “Make Believe” after reading this garbage. Checkout the next BBZ piece to find out what the biologists who live in a place called the “Real World” have to say about this plan. Also, give me some feedback regarding the numerous problems with this anti-hunting blueprint.