By the time I could walk, my father already had me in the mountains of Kentucky chasing bushytails with a... 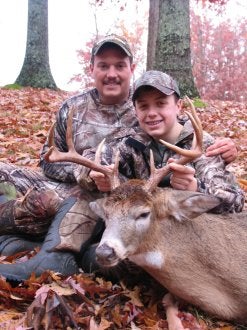 By the time I could walk, my father already had me in the mountains of Kentucky chasing bushytails with a single-shot .22 rifle. These fall trips ignited a fascination and passion for the outdoors that still burns deep inside of me today. At an early age, I could easily identify the different types of trees and various animal tracks in the woods. Hunting and the outdoors served as a classroom that taught me about the inner workings of nature and the cycle of life. It also allowed me to have a close relationship with my father and grandfather that has lasted a lifetime. In fact, hunting has enabled me to form a strong bond with my own son that has kept us extremely close over the years. However, some states are currently robbing today’s youth of this opportunity by passing laws that unfairly place age limits on young hunters.

For example, the beautiful state of Montana currently requires children to be at least 12 before they can start legally hunting. Sadly, a lot of potential hunters will be lost by the time they reach this age and many will never develop a true love for the outdoors. At around six years old, my son was already squirrel hunting and developing into an accomplished hunter. A few years later, he was able to tag his first deer and longbeard turkey at the tender age of nine. The time we’ve spent together in the woods is priceless and has had an overwhelming impact on both of our lives. My boy is a straight A student and basketball player who lives to hunt and fish. I even reward him with hunting trips for his all “A” average and other accomplishments. Without question, hunting has been an invaluable parenting tool and is directly responsible for keeping my child far away from negative influences.

In my opinion, states should not be allowed to place inappropriate age limits on hunting. This is a decision that should be made at home by parents and not some outsider with a personal agenda. In today’s crazy world, 11 years of video games, internet and television can ruin a child’s chances of developing a genuine interest for hunting and the outdoors. These age limits are detrimental to both hunting and the American family. What would your life be like right now without hunting and those wonderful childhood memories with your family? I would like to know how many other states have issued such ridiculous age requirement laws. Don’t you think it’s about time for hunters to band together and demand an immediate change in these states?