A close encounter with a buck of a lifetime just doesn’t happen every day for most hunters. However, a father... 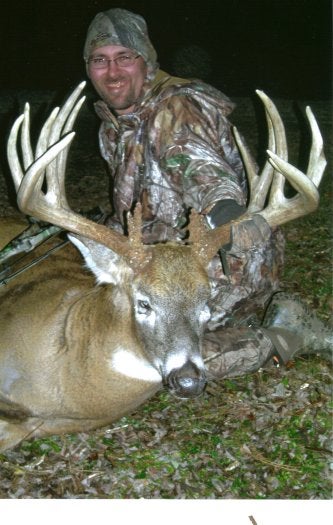 A close encounter with a buck of a lifetime just doesn’t happen every day for most hunters. However, a father and son from Iowa were able to pull off two close encounters with a pair of super bucks just a few days apart last November. Brandon Cosner was facing some pretty tough conditions during the much anticipated rut. Howling wind and a slushy rain had driven this diehard bow hunter from one of his favorite stands. Brandon and his father decided to cover a lot of ground and glass the area for a monster on the bed. Finally, the two spotted the faint outline of antlers through the tall grass. Without hesitation, Brandon checked the current wind direction and began planning a safe route that would allow him to sneak within bow range of the bedded trophy.

Amazingly, Brandon was able to use the terrain and belly crawl to within 30 yards of the unsuspecting buck. All of a sudden, a slick headed doe darted off of the bed and startled both the hunter and the lovesick bruiser. Immediately, the buck bounced from its bed and began scanning the surrounding area for danger. Within a split second, Brandon came to full draw and rested his pin just behind the buck’s muscular shoulder. The arrow collided with the massive giant leaving behind an easy to follow blood trail. Both hunters were floored when they walked up to the 193-inch buck with 16 breathtaking points. Roy Cosner told his son that it would be a long time before either hunter would ever see another buck like the one they had on the ground. Wrong!

Consequently, just four days later Roy was sitting in a treestand thinking about his son’s unbelievable hunt. About that time, a thick-racked bad boy busted through the cover in hot pursuit of an estrous doe. Roy could not believe the dark antlered buck he had been hunting for years was finally going to be within bow range. Quickly, he calmed his nerves and released an arrow toward the ghost that had been haunting him for the last two years. Once again, the father and son team found themselves back on a blood trail tracking another jaw-dropping giant. Ironically, Roy’s 184-class buck also had 16-points and sported a really nice drop tine. Congratulations Brandon and Roy Cosner on slamming two super stud Iowa bucks within a few days of each other. I guarantee that will be one season both of you will never forget! Let me know this fall if you have room for one more hunter in Iowa.