Phone In A Buck

As a young boy, one of my biggest thrills was pulling into Davenport’s Market in my small hometown during the... 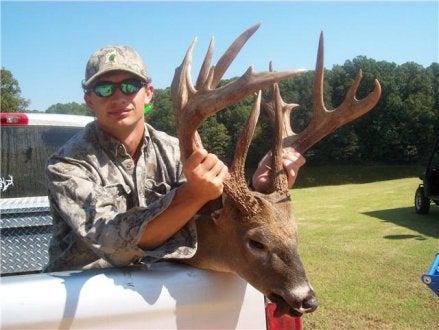 As a young boy, one of my biggest thrills was pulling into Davenport’s Market in my small hometown during the November gun season. I can remember barely being tall enough to see over the tops of the tall truck beds and trying to climb up the wheels to see what kind of buck was lying in the backs of these muddy vehicles. It seemed that every hunter in the county would check in their deer at the market and just hangout swapping stories. The little country store even had a big buck contest that awarded free deer mounts and a lever-action 30/30 rifle for the lucky hunters who brought in the largest bucks. Years later progress and technology introduced the tele-check system and now hunters simply check-in their deer over the phone. Many other states have adopted this technologically advanced method, but a lot of hunters miss the old check-in stations and are quick to point out several obvious flaws with the new system.

My home state of Kentucky currently has the new tele-check system, which has divided hunters on the subject of what technique the fish and wildlife should use to check-in deer. The anti-technology side of the debate claims that it’s now too easy for poachers to sidestep the conservative one buck limit in our state. There are stories circulating around about hunters taking several bucks in a single season by simply checking the deer in under their spouse’s or child’s name. In fact, it’s said that a large percentage of hunters don’t even use the tele-check method once the deer is home. A confirmation number is required to process or mount the deer, but people who butcher their own meat are not worried about that part.

Another valid point is that these shady practices ultimately generate false data for the state deer biologists to examine and are detrimental to the entire management program. Lastly, many feel the tele-check system takes away from the excitement and hunter camaraderie associated with the old check-in stations. However, other hunters love the convenience of the new tele-check system and could not imagine reverting back to the old ways. Most wildlife resource departments support the new program simply because it is cost efficient and harvest information can be accessed and studied very easily. With that being said, which system would you support if state’s allowed hunters to vote on the issue?