I have to admit, despite their great taste, cows have always weirded me out just a little. Maybe it’s something... 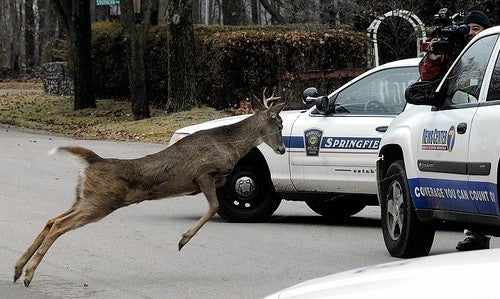 I have to admit, despite their great taste, cows have always weirded me out just a little. Maybe it’s something about the way they just gang up and stare at you as you walk among them going to a stand in the early morning darkness. They stand there staring, not moving until you’re right up on them, and then they scramble all herky-jerky-like just as you get close to them. Then they band back together and follow close behind you as if they are contemplating action. They’re dumb I know, but the fact that they are four to five times larger than I am has never been lost on me. I’ve always sensed they were plotting our demise and now from across the pond there is proof.

It seems a 49-year-old woman was walking her unleashed dogs across a pasture near Gayle, England, when a gang of cattle trampled her to death. Police speculated that perhaps the cows became protective of their calves, and when the dogs got too close, they charged, crushing the woman in the process. The country’s National Farmer’s Union said, despite a few cases each year where people are injured by cattle, the encounters don’t usually turn deadly.

But in this case, it did, which means even the most innocuous creatures in nature can turn deadly when you least expect it.

That got me wondering: How many people, if any, have ever been killed by deer in this country? Sure, we all know the stats that say between 130 and 150 people on average die each year as a result of deer/vehicle collisions making deer the most deadly animal in North America. But I’m talking about an all out, calculated, in-your-face, no-respect-for-the-food-chain attack on human beings.

-In October 2005, Ron Dudek, 73, of California, died from antler wounds to his face by a buck that attacked him when he went to pick tomatoes in his backyard.

– In November 2005, a California woman was hospitalized for 12 days after suffering head injuries from a deer attack outside of her home. Just two months earlier, Arnold and Jeannine Bloom were attacked and wounded by a small buck after watering a friend’s vegetable garden.

-In October 2007, John Henry Frix, 66, of Maryland, was found dead in a pen where he raised deer. He had been gored several times by antlers.

The lesson here is don’t mess with deer in pens or around gardens and you should be just fine.

But then, just last month in Virginia, while walking on his Pulaski County property, Jimmy Yopp was chased and attacked by a young deer that knocked him to the ground several times and doe-slapped him with its hooves. Two days later, a man and his son were attacked in their yard by what is believed to be the same deer. They escaped with minor injuries. The deer screwed up the next day when it attempted the same stunt with a conservation officer investigating the earlier incidents. The officer was packing heat and the deer’s carcass was ultimately sent packing to a state lab where it was tested and found to be free of rabies.

Just last week, a woman’s dog was killed by a doe in the woman’s Indiana backyard. The doe trampled the dog to death with it’s hooves in front of the woman and her grandchildren. An officer was quoted as saying that these cases are rare, and while they statistically are, they’re not as rare as one would believe.

I couldn’t find any incidents where a hunter was actually attacked. If you know of one or know of other attacks not mentioned above, please share it with us at the BBZ.

While deer (and cows) are hardly ready to be classified as “dangerous game” for these (and I’m sure other occasional) attacks, we may not be that far from the old South Park episode where the kids learn that before they can shoot an animal they had to legally shout, “It’s coming right at us.” Indeed, it just might be coming right at us! Watch your back out there.