The quiet Euclid, Ohio, widow who kept mostly to herself said she was “a giving person” and “a loving person”... 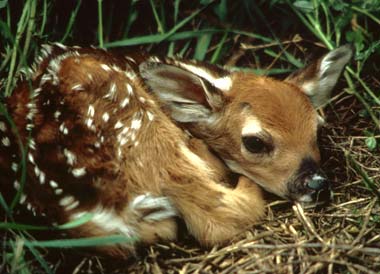 The quiet Euclid, Ohio, widow who kept mostly to herself said she was “a giving person” and “a loving person” when confronted by a WKYC reporter earlier this week. Well, she certainly gave it to a Bambi-sized fawn she discovered hiding in her flower bed recently.

The widow, Dorothy Richardson, allegedly beat to death the 25-pound fawn with a garden shovel after spotting it cowering among her bushes and then stuffed it’s carcass in a cardboard box and placed it at the curb for a trip to the local landfill. Yikes! Joe Pesci never had it so bad in any of his roles as a wise-cracking mobster.

“I just tapped him a little bit…just a little tap,” Richardson told WKYC as she demonstrated her technique. “I did like this…tap…just tapping, get going. His eyes contacted my eyes like he’s going wild. And when is he going to jump and, and bite my head off?”

“She hit it once and according to her, it squealed and she hit it two more times. And she says what I wanted to do is put the deer at the edge of the yard so the other deer know not to mess with me…” Gruber told the news station. That’s some real Tower of London stuff right there. Gruber by the way, is now a witness in the animal cruelty case that Dorothy “The Shovel” Richardson has been brought up on. If convicted, she faces up to 60 days in jail and $1,000 fine.

In response to her fears that the fawn was going to savagely “bite her head off,” I can relate. Hey Dorothy, it’s sort of like those cows I blogged about the other week. Of course, I never went medieval on them with a pair of pliers and blow torch either.