Personally, I do not think there is anything in the world that can kick my adrenaline into overdrive like a... 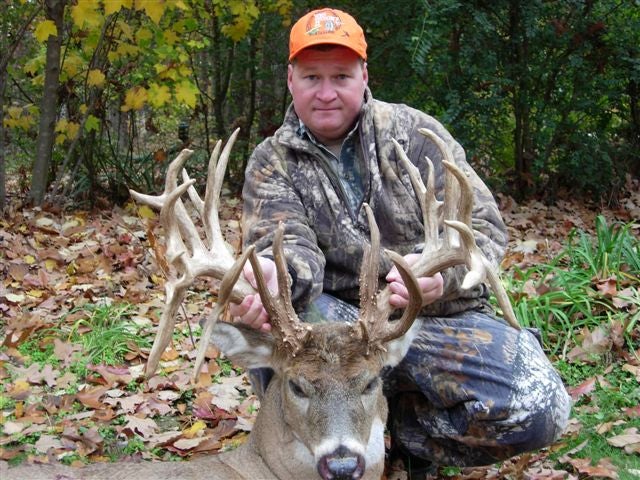 Personally, I do not think there is anything in the world that can kick my adrenaline into overdrive like a top-heavy whitetail buck with a lot of character. By character, I am talking about a thick massive rack with gnarly kickers, stickers and trash. Throw in a pair of draping drop-tines and you’ve got just the right dosage to flat-line this poor deer hunter’s heart. Consequently, the buck I just described is exactly what walked in front of Robert Taylor during the 2008 firearm season in Kentucky. Just a brief glimpse of this 29-point bluegrass bruiser will make you want to jump into a treestand right now and hold on tight until the end of season. With that being said, let’s take a quick look at how a last minute decision generated an encounter with a buck of a lifetime.

Like most of us, Robert Taylor is a hunter who works hard for a living, but he lives to chase whitetails during the fall of the year. Last November was no exception and Taylor made a long drive north to Kentucky to hunt one of his favorite locations. Unfortunately, two consecutive days in the same stand had produced no big buck sightings. Furthermore, to make matters worse, the weather forecast was predicting strong storms and heavy rain for the next day. At this point, Taylor had just about decided to stay in and rest during the bad weather. However, something told him to give the stand on the edge of an old reclaimed strip mine at least one more chance. This split-second decision to tough things out and stay in the woods was probably the best move Taylor had ever made as a deer hunter.

After hours of patiently sitting still, Taylor’s persistence was finally rewarded just before dark. As the last few minutes of shooting light winded down, he began to quietly put away his gear and call it a night. At that very moment, the buck of his dreams materialized and stepped into an opening about 200 yards from his stand. Without hesitation, Taylor steadied his aim and slowly squeezed the trigger causing an echoing boom to break the evening silence. Ironically, it started raining just after the shot and Taylor had to work fast to reach the last place he had seen the buck. A sigh of relief hit the hunter when he spotted the monster piled up about 20 yards deeper into the woods than what he had expected. The buck’s intimidating rack looked like a thick entanglement of bony points and curling drop-tines. Refusing to throw in the towel allowed Taylor to tag a giant 29-point non-typical that scored an amazing 249 & 6/8. Way to hang in there brother!