It’s becoming painfully obvious that I was born at least a hundred years too late. I arrived upon this realization... 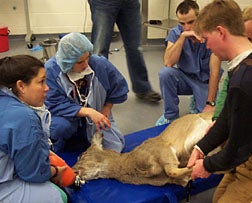 It’s becoming painfully obvious that I was born at least a hundred years too late. I arrived upon this realization after researching deer birth control, which is the new fix-all solution being proposed by the “enlightened elite” or anti-hunting organizations. In fact, there are currently several websites devoted entirely to promoting this “morally superior” deer management program over hunting. Recently, a group of residents in Princeton, New Jersey tried to block a private sharp-shooting firm from removing deer in their town. In addition, a poll conducted by Rutgers University revealed that half of New Jersey residents believed an animal’s life to be as sacred as a human being’s. I guess there are either a lot of vegetarians running around in New Jersey or a bunch of hypocrites participated in the poll. In my opinion, hunters really need to start spreading the truth about deer birth control and the benefits of hunting in general.

Did you know it actually costs a staggering $1,000 per doe to implement the deer birth control vaccine for the first two years of treatment? The program is extremely high-priced and very labor intensive. Workers are required to shoot does with vaccine-laden darts that only last through one rutting period. I am definitely not an accountant, but it doesn’t take a mathematician to see just how expensive this program could be for taxpayers. In most cases, areas that were densely populated with deer had disastrous results with the birth control management plan. Basically, the program costs huge sums of money, but fails to get the job done. On the other hand, cities with large deer herds that permitted special archery seasons were able to dramatically reduce numbers. Once again, hunting has proven to be the most logical, inexpensive and effective way to manage a healthy deer herd. It’s imperative that non-hunters be exposed to actual facts instead of all the anti-hunting propaganda that comes out of fantasy land.

In the real world, the success of whitetails and other types of wildlife can be directly linked to hunters. Money from hunting licenses and equipment sales help fund state wildlife agencies, habitat improvement projects and re-introduction stocking programs. Wildlife agencies conduct extensive work and research that helps maintain healthy populations of wildlife across the nation. How much money does anti-hunting organizations actually spend on whitetails or any animal for that matter? Most of their funds are geared toward running sensational ads, publicity stunts and for gaining celebrity support. However, hunting builds strong family bonds, helps maintain healthy wildlife populations, prevents the spread of disease and has a positive impact on animals. As hunters, what are some ways we can get our message across and fight this nonsense?