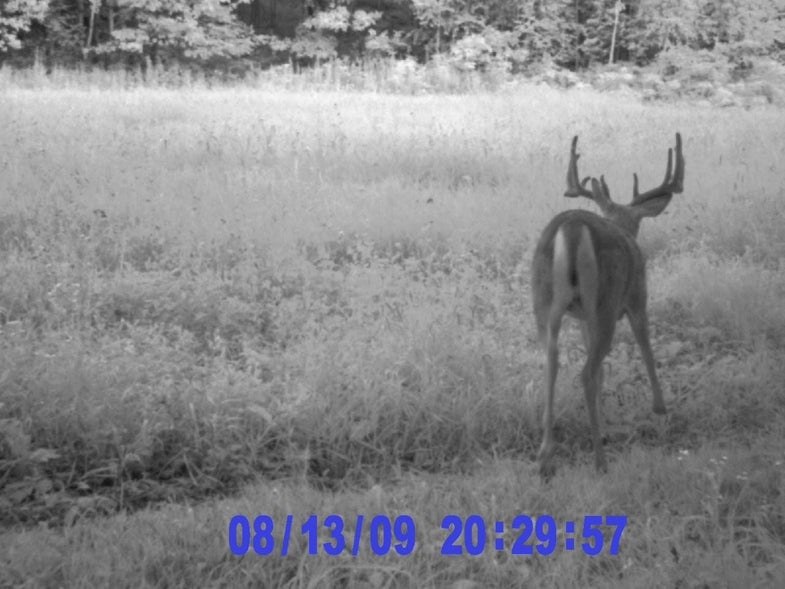 Hunters are keeping tabs on their whitetails more than conservative talk show hosts are keeping tabs on the new administration. Your summer intelligence gathering can oftentimes be used for a slam-dunk hunt in the early-season. If not, file the information away and look for the buck in the neighborhood once the appropriate season opens for you.

Art Helin is sitting in a good spot for a slam-dunk. Art’s a pro staffer for Realtree and Hunter’s Specialties, plus he manages property in southwest Wisconsin’s big buck zone. One of Art’s favorite pastimes is keeping tabs on the bucks that roam his property. One of them has really grabbed his attention and not so much because he’s a big buck, but because his character changed drastically from the past two years.

For some reason a big 5×5 that Art’s tried to keep tabs on suddenly loves attention and doesn’t mind having his photo taken. For the past two years Art caught the buck occasionally on his trail cameras, but the buck was never consistent and would show up when and where it wanted. In fact, once the bow season started in September, the 5×5 would disappear most of the season.

“I am hoping to kill him,” shares Art. “I set a new stand and filming stand on him yesterday. I passed this buck for the last two years. In fact, last year he disappeared about a week ago in mid-August and then he showed up twice once in October and once in November. This year he has been steady for about four weeks now with appearances about four or five nights a week.”

There are several reasons why the buck could be more consistent. Art surmises his switch to Antler King’s Red Zone as one reason the buck might be visiting his food plots more. The seed mixture has peas, soybeans, buckwheat and other forage in its mix. The growth on the plot has been excellent and Art thinks the forage is keeping the buck “full and content” for the present.

Another possible reason the buck visits Art’s food plot consistently is Art’s attention to water. He has a water hole 50 yards from the field and the buck has been visiting it as much as the field itself…at least in photos anyway.

Finally, Art doesn’t invade the field daily to check his Moultrie trail cameras. The buck’s stomping grounds are 20 minutes off the beaten path and Art uses his ATV to check the cameras once every 10 to 12 days. He pulls in, doesn’t get off the ATV, swaps chips and is off and running again.

With stands set for a 15-yard chip shot Art is just idling the days away until the Wisconsin opener. When I asked Art what he thought the buck would score he answered this way.

“I know he is at least a 4 1/2-year-old buck and I say he is about at the 150 mark. Others who have seen the photos think he’s bigger, but I say ground check him and then we’ll know for sure. You can probably tell I’m hoping to kill him.”