Is Your Buck Missing?

Hunters are keeping tabs on bucks more intently than ever before with the current craze in trail cameras. They see... 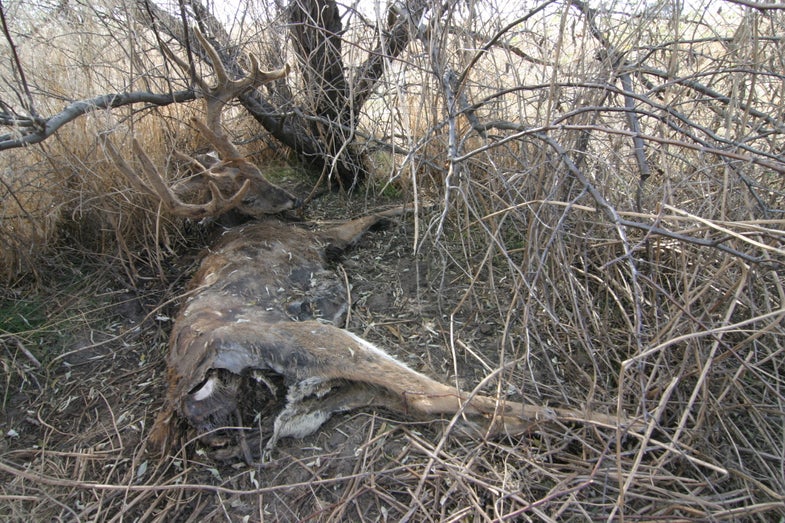 Hunters are keeping tabs on bucks more intently than ever before with the current craze in trail cameras. They see bucks via images that they’ve never laid eyes on keeping hopes high to eventually tag a monster right in their backyard. Unfortunately, some of those bucks may come up missing. Vehicle collisions, natural accidents, predation and disease are the main culprits for bucks to go missing. One major reason for a buck to pull the disappearing act is about to raise its ugly head.

Referred to by wildlife biologists as HD or Hemorrhagic disease, it also goes by the name of blue tongue. This disease, although studied in depth, attacks with lightning speed and intensity, yet has no cure. Hemorrhagic disease is the most highly visible viral disease affecting whitetails.

Spread by a tiny two-winged midge, HD can kill an infected animal within days, if not sooner. Affected animals are inflicted with a high fever and hemorrhage internally. They generally seek water for relief and this is the reason many carcasses are discovered near reservoirs, creeks and rivers. HD kicks off in the late summer and peaks in September. A killing frost knocks back the midge population and halts the spread, but it still leaves you scratching your head as to where all the deer went. If your area is going to be affected this year, signs could begin showing up soon. If you smell a dead animal near a water source there’s a high probability it is an HD affected whitetail.

HD can nearly wipe out a herd during a major outbreak. According to information from the University of Georgia and the University of California, estimates of mortality exceeding 90 percent may occur. I’ve seen firsthand localized mortality of HD of 50 percent or more in South Dakota, Nebraska, Wyoming and Montana. In fact, more than once I’ve had to cancel or switch hunting locations at the last minute due to HD outbreaks.

The other big disease to grab headlines is Chronic Wasting disease, but is it really something to fear? At this stage the infection rate is small, less than five percent in most areas. According to the Chronic Wasting Disease Alliance, CWD is described as “a transmissible spongiform encephalopathy (TSE) of cervids.” Its infectious agents are hypothesized to be prions, which are infectious proteins without associated nucleic acids. The most infectious areas of a deer or other ungulate, is the brain and spinal cord, hence it is advised to always wear latex gloves when field dressing a deer or elk.

Infectious models indicate that CWD could spread through deer populations over the next several decades with disastrous results. Regardless, so much is unknown about this disease that it is tough to predict anything with accuracy. For now, your best bet is to keep your herd density at a manageable level and work hard at keeping deer spread out and not congregated in one location since the disease is believed to be spread through deer interaction.

What’s worse, HD or CWD? My hunting has always been affected by HD, but rarely CWD, if ever. That may change in the future, but when a buck comes up missing in my backyard I’m betting on HD as the culprit.or the front bumper of a Dodge truck.