Over the past few months, I’ve been suffering from withdrawal as a diehard deer hunter. The spring turkey season was... 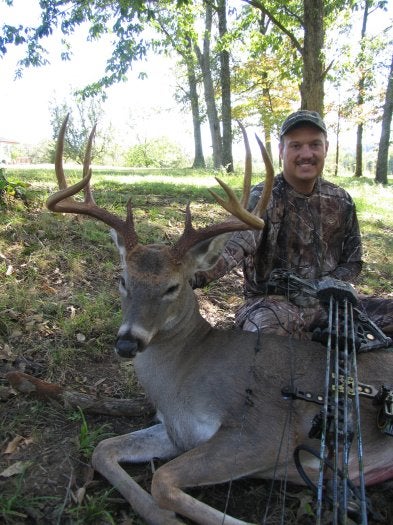 Over the past few months, I’ve been suffering from withdrawal as a diehard deer hunter. The spring turkey season was great, but there is still nothing that gets my heart pumping more than the sight of a heavy-racked buck during the fall of the year. Recently, I hit the road for an early-season bowhunt in Illinois with an admittedly itchy trigger finger. During the first evening of my hunt, the wind just about blew my cameraman and me out of the tree. However, before dark the wind died off enough to make the deer start moving a little. I was hunting a patch of white oaks that bordered the edge of a soybean field surrounded by a lot of thick cover. The area was hot with fresh sign, which really made my heart rate jump up a few notches.

About an hour before dark, I heard the old familiar sound of a deer trotting through the dry leaves just behind my stand. A high-racked buck with long tines and a crab-claw at the end of its main beam stepped out of the thicket. The buck was angling away from my stand toward the bean field and things were not looking good. There were only a handful of openings along the buck’s route and pulling off a shot was going to be tough. Finally, I was able to lean between the forks of a tree and thread an arrow through a small opening of the leafy canopy. A loud smack echoed across the bean field when my arrow collided with the buck causing a quick serge of adrenalin to take over my entire body.

Unfortunately, a severe thunderstorm blew in before I was able to recover my first deer of the season. We reviewed the video footage back at camp and knew the shot was good, but I still was unable to sleep a wink that night. By the next morning, the blood trail had practically disappeared after the strong rain. However, the buck was last seen running toward a creek that cut through the heart of the thicket. It looked like the Amazon Jungle, which made tracking the deer extremely tough. Finally, after combing through the thick entanglement of briars, downed tree limbs, and weeds we were able to reach the creek. Within a few yards, we spotted the buck’s tines sticking just above an old brush pile in the creek bed. It was a great feeling to strike first blood and get my hands around the rack of a good early-season buck. However, this hunt only fueled my addiction and has made going to work this week even harder.