Reports of giant bucks are streaming in to the Big Buck Zone. We promise to post photos and stories at... 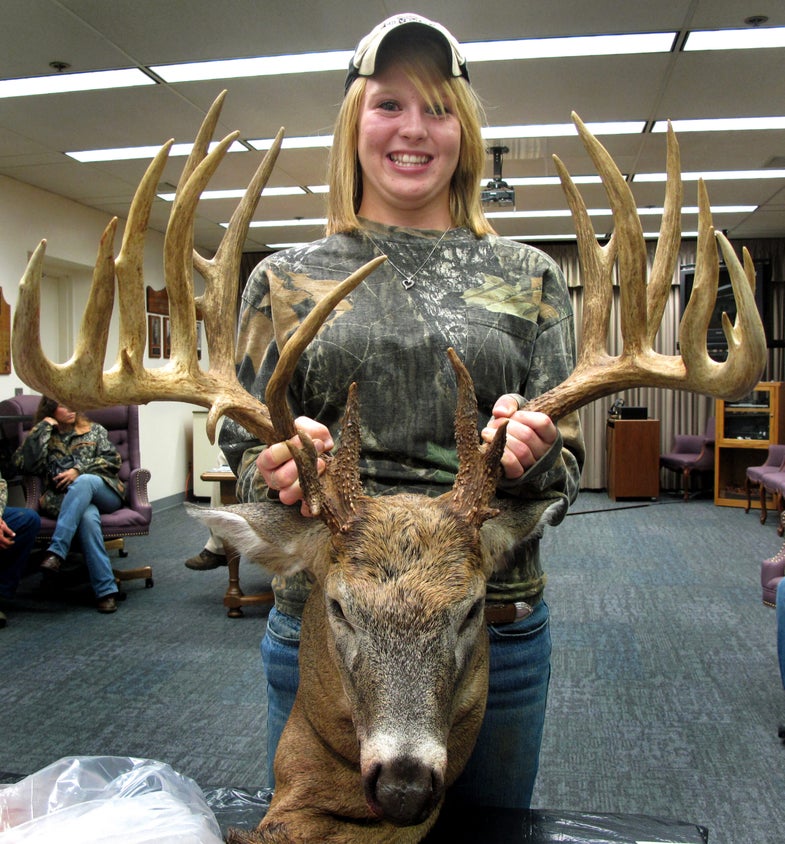 Reports of giant bucks are streaming in to the Big Buck Zone. We promise to post photos and stories at any hour of the day or night as we receive them. Here’s a great story out of Kentucky.

Anyone who has ever picked up a bow or climbed into a treestand has dreamed about running into an absolute monster during deer season. All of us have envisioned a bruiser with heavy mass and super long tines. Unfortunately, for many hunters this type of buck only shows up during an occasional dream or distracting thought. However, sometimes things just magically fall into place and a distant dream suddenly becomes a reality. This is exactly what happened to a young hunter named Michaella Monroe during Kentucky’s 2009 youth season. Monroe was able to come face to face with a buck that would make any veteran deer hunter’s heart skip a few beats. This young lady kept her cool and was able to drop the hammer on a jaw-dropping giant that would green score around 230. How is that for jumpstarting your season?

It’s a safe bet that Paul and Sheridan Monroe are more than just a little proud of their 14-year old daughter. Paul Monroe took his daughter Michaella into the field during Kentucky’s annual 2-day youth season in Spencer County. This special season is setup as a tool for introducing and encouraging more young people to take up hunting across the Bluegrass State. During the hunt, Michaella came face to face with a true buck of a lifetime that has the entire state talking right now. Can you imagine squeezing the trigger on a 26-point trophy with well over 200 inches of antler? The picture of this unbelievable buck alone is enough to make you want to grab your bow and climb up a tree right now. Michaella is definitely starting her deer hunting career at the very top and it will be tough for her to ever match this season. Way to go girl!

All of us at the BBZ would like to congratulate Michaella Monroe on one heck of a buck. As hunters, we also appreciate her father and mother for taking the time to pass on the gift of hunting and the outdoors to their young daughter. I strongly believe that a family who hunts together has a better chance of staying together. In addition, I would like to know what all of you think about Michaella Monroe’s monster whitetail and this story? Also, what are your thoughts about a young hunter tagging a giant right off the bat?