Last season, my son James Travis Faulkner, almost shot the biggest buck he had ever encountered in the woods during... 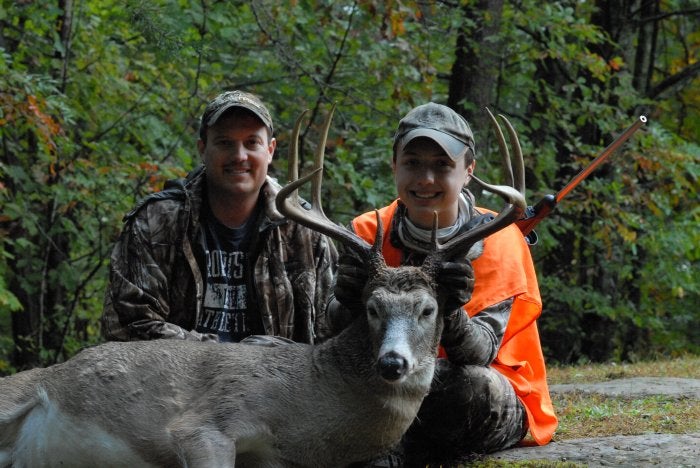 Last season, my son James Travis Faulkner, almost shot the biggest buck he had ever encountered in the woods during our state’s two day youth season. However, the sneaky old veteran was able to slip through the thick cover without offering my boy an ethical shot. For the next few months, this particular buck was the main topic of discussion at my house. James stuck with that deer for the remainder of the season, but the buck went into stealth mode and was not seen again.

I explained to James that he had done the right thing by not taking a questionable shot and that he may actually cross paths with the buck again. As fate would have it, we returned to the same area this past weekend for another youth season hunt. The first morning it poured rain and a few does were all that showed up. Later that evening, we found ourselves sitting in the exact spot where the first encounter had occurred the year before. I caught a quick glimpse of a tail flickering deep inside a thick entanglement of weeds and underbrush. After quickly glassing the area, I found the deer and there was no doubt this was the same buck. James already had his .270 rifle aimed toward a small clearing along the edge of the thicket. Within seconds, the buck stepped into the opening and momentarily paused. A loud echoing boom broke the evening silence and sent the long-tined trophy into a short death run that ended not 20 yards from our setup. I had smoked a nice buck in Illinois just before the youth season, but I wouldn’t trade 10 heavy-racked giants for this hunt with my son. James is on top of the world right now and all he can say is that redemption is sweet! Congratulations son.